Russia to Introduce URAN-9 into Service from 2022

Russian Ground Forces will introduce the URAN-9 combat UGV into service ahead of a series of further experiments in 2022, according to an interview with Oleg Salyukov, CinC of the Russian armed forces, published by Red Star on 1 October.

The vehicles are to be subjected to a series of troop trials throughout 2022, after which a decision is to be made about the optimal quantity to be procured, Salyukov said. Five URAN-9 complexes, each consisting of four UGVs and a command unit based on a KamAZ truck, were delivered to the Russian MoD in April 2021. Salyukov added that URAN-9s had been used during the ZAPAD-21 strategic exercise held between 10-17 September. They had been operated from a range of 1.5km, and were used to engage armoured targets with 9M120 ATAKA ATGM and a sensor suite designed to locate and identify electro-optical systems, according to the Russian MoD.

Russian forces are clearly experimenting with a variety of UGVs in an effort to ascertain what they can be reliably tasked to do. The entry of the vehicles into service with a broader range of units will feed into the development of concepts of operations, and clarify how the robot complexes must be developed in order to meet user requirements. It is possible that SHTURM – a complex of UGVs based on the T-72 tank – will follow a similar path into service and experimental use.

The Russian MoD is investing in automation and machine learning as a means to improve the speed with which its forces can make decisions and shape a battlefield in their favour. The use of UGVs and UAVs appears to be critical to the overall improvement of the combat capabilities of the ground forces. 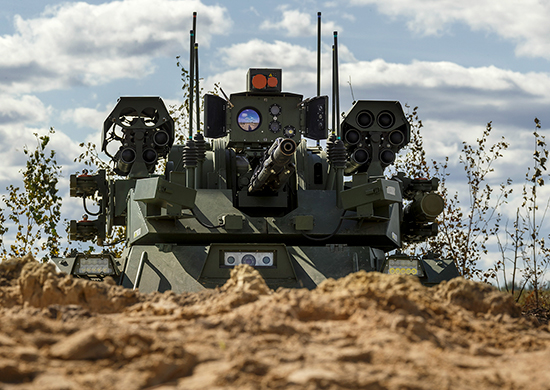 The Russian MoD intends to deliver URAN-9 combat UGVs to its forces in 2022, enabling a period of experimentation that will inform the platform’s ultimate procurement. (Photo: Russian MoD)