President Volodymyr Zelensky of Ukraine has told journalists that Ukrainian intelligence has identified a plot to launch a coup d’etat against him on 1 December. In a 26 November briefing, though, he refused to state that the Kremlin was behind coup.

“We even have audio information, where representatives from Ukraine, with representatives of Russia, so to speak, discuss Rinat Akhmetov’s participation in the coup d’etat in Ukraine, that billions of dollars will be involved, etc.,” Zelensky said. He later clarified that he thought Akhmetov was being drawn into the coup, as opposed to leading it himself.

Rinat Akhmetov is a wealthy businessman and oligarch in Ukraine, owner of energy companies and media outlets. He has denied Zelensky’s claims stating, “I am outraged by the spread of this lie, regardless of what motives the president is guided by.” Dmitry Peskov, the Kremlin spokesperson said, “Russia has never had any plans to take part [in a coup]. Russia generally never engages in such matters,” in a statement on 26 November.

In July, Zelensky introduced a bill into parliament, designed to curtail the power of Ukraine’s oligarchs and reduce their influence over politics and society in general. He has also made his opposition to Russia and its support for the fighting in eastern Ukraine crystal clear. It would therefore be unsurprising if efforts were under way to organise a coup against him, and introduce a more pliable leader into Ukraine’s government. Publicly raising the prospect of a coup – if one is under way – would make its conduct more challenging.

It may also be possible that, as Zelensky is facing pressure from multiple avenues and a large concentration of Russian forces on the Ukrainian border, he is seeking to focus attention on his and his country’s plight. 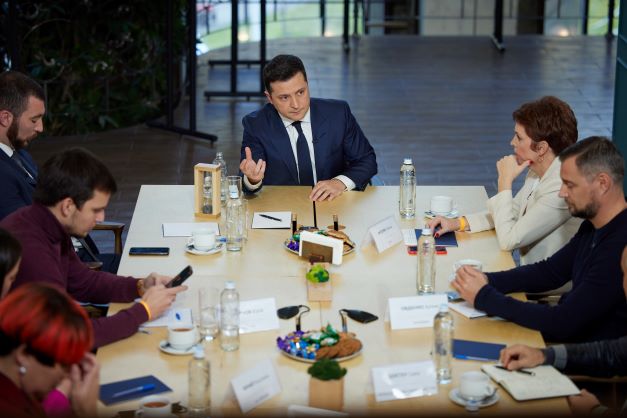 President Volodymyr Zelensky of Ukraine has informed journalists that intelligence indicates that a coup d’etat has been planned against his government. (Photo: Office of the President of Ukraine)