Barrett Communications has released the 4020 HF Radio Mailbox to complement the successful 2020 HF Fax and Data Systems, in widespread use over the last 15 years, the Australian company announced on 28 June.

The new device uses new technologies to deliver seamless IMAP synchronised email over HF radio and onto users’ smart devices – a feature previously unavailable to the HF radio user. It has been developed to meet increasing demand from users for communication via email from wherever they are, including remote and isolated locations connected only by HF radio, and a smartphone, tablet or laptop using existing and familiar email platforms such as Outlook, Gmail or Apple Mail. Previously, each user was required to run PC-based applications to send and receive POP/SMTP email via HF radio. The HF Radio Mailbox requires no PC connection, and handles all incoming and outgoing secure mail transfers, requiring the user to simply connect their smart device to the Mailbox’s inbuilt WiFi hotspot and directly synchronise their mail account. Any mail received by the Mailbox is automatically synchronised with the user’s device, and outgoing mail is sent via the HF radio using automatic link establishment to the radio gateway and on to the private/public domain mail server. 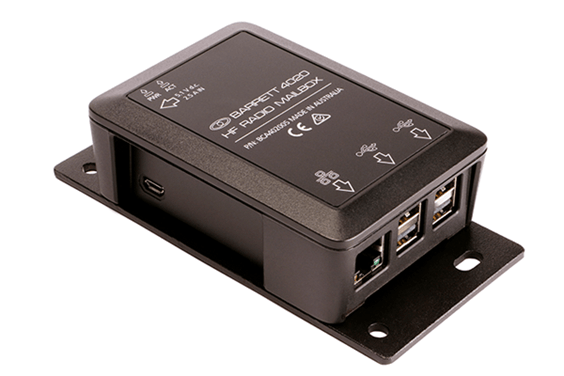 The small size of the HF Radio Mailbox makes it adaptable to a wide range of base station, mobile and even manpack applications. (Photo: Barrett Communications)