Aviation Industry Corporation of China (AVIC) has added a new member to its family of Wing Loong strike-capable, reconnaissance UAVs. A prototype of the new Wing Loong-1E made its 22min-long maiden flight on 18 January, the company announced via its Weibo account.

AVIC noted the new multirole platform, an “optimised and upgraded” variant of the Wing Loong-1 medium-altitude, long-endurance (MALE) UAV, is made of all-composite materials: an indication that it may be lighter than its predecessor, with consequently longer range and better endurance. Analysis of imagery provided by the company indicates that the Wing Loong-1E, which was developed by the AVIC (Chengdu) Unmanned Aerial Vehicle System Co., features upward-pointing winglets – unlike its predecessor – and that its front has undergone some aerodynamic changes.

AVIC provided no further details on performance or dimensions, but the platform is expected to be more capable than the standard Wing Loong-1, which is in service with the PLAAF as the Gongji-1 (GJ-1). Powered by a single-piston engine, the Wing Loong-1 – 2.8m high, 9m long, with a 14m wingspan – has a service ceiling of 7,500m, can carry loads of up to 200kg, including laser-guided bombs and missiles, has a maximum take-off weight of 1,150kg, and an endurance of about 20 hours. 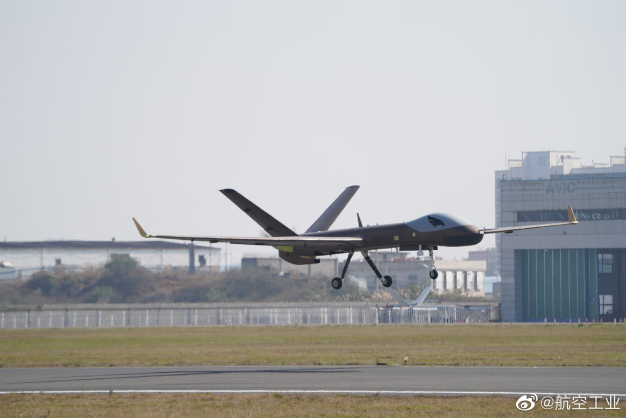