As 9 May approached, all eyes were on a 21t, 30m section of rocket hurtling towards Earth. Space objects usually disintegrate when entering Earth’s atmosphere, but the sheer size of this debris gave greater cause for concern.

Observers faced with significant challenges: uncertainty about whether the rocket would break up completely on re-entry into the atmosphere; and difficulty in accurately predicting where any surviving parts might land.

Agencies around the world followed the path of the object carefully in the days preceding re-entry. The large space object, labelled CZ-5B R/B (2021-035B), was the booster stage of the rocket launched on 29 April carrying the first section of China’s space station, TIANHE (Heavenly Harmony). It was one of the largest pieces of space debris to approach Earth in recent times.

For safety reasons, it was crucial that the rocket section, orbiting Earth at about 29,000km/h, was accurately tracked, and that its behaviour on re-entry was closely monitored and precisely analysed. The final hours before re-entry were crucial. Before then, the best possible impact prediction for any surviving parts was a wide section of Earth running from the southern regions of Spain, Portugal and Italy down to Australia – between 41° north and 41° south.

From a location in Italy, a Multi-Frequency Doppler Radar from Weibel tracked the object, providing valuable data to enable the best possible estimate of expected re-entry location and timing.

Aleksandar Grgic, Director Space Solutions at Weibel, explained. “The Weibel long-range tracking radar enabled the Doppler variation of the spinning Chinese rocket booster section to be captured as it passed over Europe. The Weibel radar provided highly accurate TSPI trajectory readings and accurate data for analysing the object’s tumbling rate, which helped narrow down predictions for its entry time and position. This was particularly important as the debris made its final approach.”

About 150t of space debris re-enter Earth’s atmosphere each year, with most falling into the Pacific Ocean. Despite a very low incident rate, there is growing concern about the potential of large objects to cause damage on Earth. In the UK, for example, The Guardian newspaper reported damage to buildings from space junk falling on the Ivory Coast in 2020.

The ability to detect, track and monitor space debris, analyse data and build an accurate picture is crucial to Space Situational Awareness (SSA), a cornerstone of the EU’s focus on building space capability. 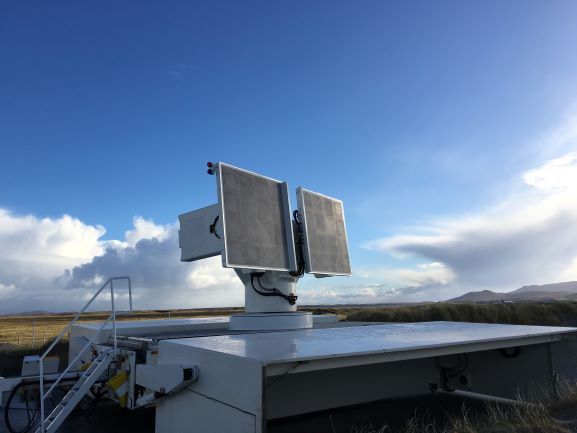 Debris from CZ-5B R/B was expected to land anywhere between 41° north and 41° south. In the lower picture is a 45dB, MFTR-2100 long-range tracking radar in operation. (Images: EU SST; Weibel Scientific)