Both solutions are offered to the Polish Ministry of National Defence (MoND) and foreign customers.

WB Group is a leading Polish defence company, with impressive deliveries to various customers around the world, including the Middle East and Asia.

At MSPO2018, the company announced, “the evolution of its TOPAZ software system from only a fire control software system to a fully integrated combat management system – ICMS for military users – providing a comprehensive suite of tools for commanders to enable quicker decision making and reaction.”

TOPAZ facilitates battlefield management at every command level, enables a real-time analysis of information acquired from reconnaissance and observation systems and ensures a precise strike with use of the available loitering munitions systems.

TOPAZ was concieved during the 1990s when Poland needed a new fire control system for its aging, post-Soviet equipment in order to upgrade them to NATO standards and requirements. After several years of assessments and engineering works, WB Electronics delivered the first variant of the TOPAZ ZZKO (Automated Fire Control System for ground artillery) in 2003. This product allowed the company to gain international recognition and reputation in Poland. It also allowed the company to launch the FONET Digital Internal Communications System, which still is an important element of WB Group’s portfolio. Very soon, the FONT system was introduced not only in the Polish artillery units, but also on-board the ROSOMAK APCs. It is estimated that, currently, the Polish Armed Forces has more than 1,500 TOPAZ systems in service. They were combat-tested in Chad, Iraq and Afghanistan. The TOPAZ system was also delivered to one of the North African countries, most likely Egypt.

During the same event, the WB Group showcased the latest version of the WARMATE Loitering Munition System. The new variant, WARMATE-2, is larger and, according to the supplier, more lethal. It has a more powerful warhead and longer flight endurance. WARMATE 2 is designed to be integrated with ground assets, optimizing eyes-on-target and command and control operations for ground vehicles, all additional equipment for transportation, launch and communications devices. It can be equipped with one of several available warheads, including anti-personnel (3 kg of explosives, 100 metres blast radius), anti-armour (it can penetrate up to 400 mm RHA, Rolled Homogenous Armour) or a training warhead.

The WARMATE munitions has already been delivered to the Polish Armed Forces and abroad, including one of the NATO member states. Last year, the WB Group signed a contract at MSPO2017 with the Ukrainian company SpetsTechnoExport to deliver WARMATE loitering munitions. The WARMATE-2 was designed in cooperation with a Tawazun company from the United Arab Emirates. 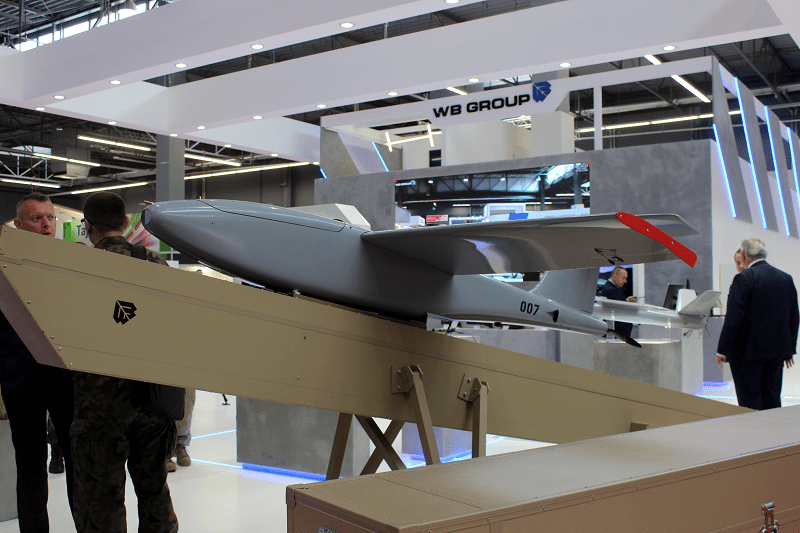