The partnership, which originates from 2015, was highlighted today in Paris during a joint press conference at Euronaval.

“The result of the collaboration will be a customer-adapted submarine for expeditionary missions,” Hein van Ameijden, Managing Director of Damen Schelde Naval Shipbuildning, continues. “This will ensure that the Royal Netherlands Navy [RNlN] continues to play an important role in European waters as well as globally.”

The Expeditionary Submarine builds on the capabilities of the Swedish A26 and puts into practice the experience of the Swedish designed ‘Collins’-class submarine in-service with the Australian Navy.

In addition, the ‘Walrus’ replacement will also benefit from the operational lessons reflected in the Swedish Navy’s ‘Gotland’ Mid-Life Upgrade (MLU). As a result the Expeditionary Submarine will be equipped with state of the art technology whilst benefiting from de-risking on three submarine classes. Damen and Saab are thereby creating one of the most modern Air Independent Propulsion (AIP) submarines in the world, which if selected, will be done in consultation with the customer using a ‘design to cost’ approach.

The production process will see sections made in Sweden and then assembled at Vlissingen in the Netherlands. Having secured the cooperation of many Dutch companies, Saab and Damen are set to enhance the domestic submarine competence. The RNlN aims to have the new ship in water by 2027, but a new version of the Netherlands Defence Strategy plan will come out in the near future, which will detail specifics.

With the A26 Saab is addressing the Polish Navy’s submarine requirements, and looking at other regions, Mr Wieslander tells Euronaval Dailies. Saab furthermore state at the show that on 19 October,His Swedish Majesty Ship (HSwMS) Gotland started its sea trials at the Saab shipyard in Karlskrona, after a comprehensive MLU to ensure its operational service to Sweden beyond 2025. This expertise also flows into the partnership.

Other contenders for the ‘Walrus’-class include Naval Group offering its newest submarine class, the “Shortfin” diesel-electric variant ‘Barracuda’-class submarine, alongside thyssenkrupp Marine Systems and Navantia. 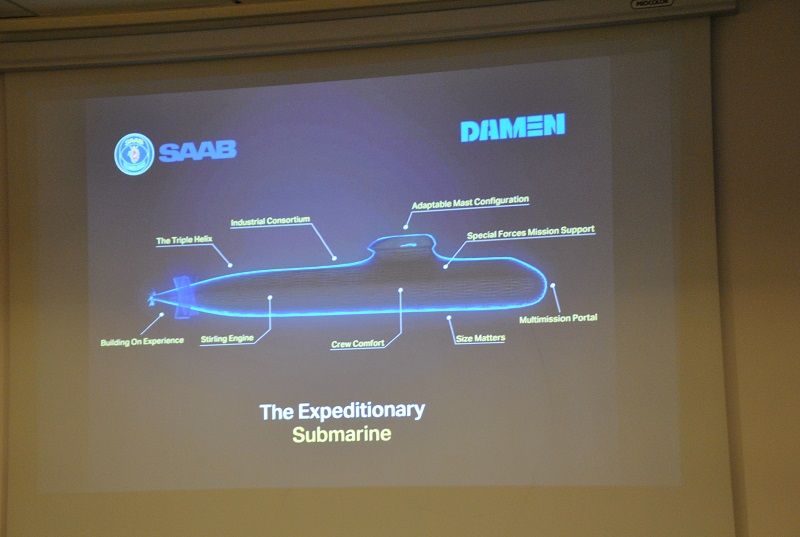