The Indian government’s Press Information Bureau (PIB) announced on 9 January that the country’s first indigenously-designed and -built aircraft carrier, the future INS Vikrant, has embarked on its third phase of sea trials. The 263m vessel will undertake “complex manoeuvres to establish specific readings of how the ship performs in various conditions,” the PIB stated, adding that “various sensor suites” will also be tested.

During the first round of sea trials, which began last August, some of the carrier’s main systems, including its propulsion plants as well as navigation and communication systems, were put to the test. The second round, held between October and November, saw the ship being “put through its paces in terms of various machinery trials and flight trials”.

Also referred to as the Indigenous Aircraft Carrier (IAC)‐1, Vikrant, first launched by Cochin Shipyard Limited in August 2013, and completed harbour and basin trials in December 2020, is over six years behind schedule. That said, PIB noted that the carrier is scheduled for commissioning later this year, possibly by 15 August as part of a series of events and festivities across the country to commemorate ‘Azadi Ka Amrit Mahotsav’ or 75 years of Indian independence.

According to the PIB, 76% of the components of the 40,000t Vikrant have been sourced locally, according to PIB. However, the ship is expected to be commissioned without its Aviation Facility Complex (AFC), which will be provided by Russia’s Nevskoe Design Bureau (NDB) at a later stage to support an approx. 40 complement of fixed- and rotary-wing aircraft.

The carrier has a stated top speed of about 28kst and a cruising speed of 18kts, with a standard range of about 7,500 nautical miles. It features a ‘ski-jump’ ramp and has a total of 14 decks, including five in the superstructure. The vessel also has more than 2,300 compartments designed for a crew of around 1,700, including specialised cabins to accommodate female officers, according to the PIB. 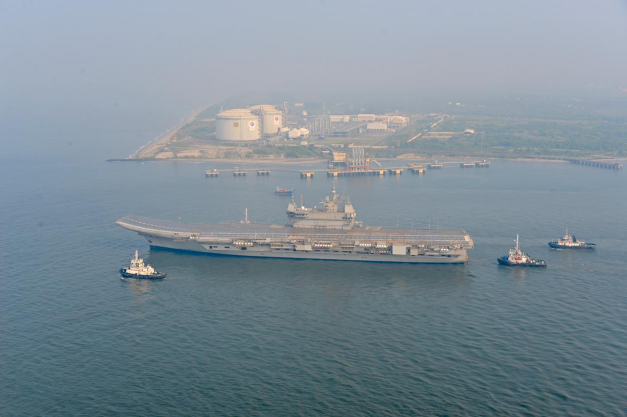