Viasat has reached an agreement to buy its rival, Inmarsat, according to a statement released by both companies on 8 November. The deal values the British satellite and mobile communications services company at $7.3bn (€6.4bn). But shares in the California-headquartered Viasat dropped around 15% in the wake of the announcement, as markets began to price in concerns that the British government may delay, or even block, the deal.

The agreement would see Viasat paying $850 million in cash, handing over 46.36m shares of its own common stock, and assuming $3.4 billion of debt. Viasat “has obtained financing commitments for $2.3 billion of new debt facilities required to complete this transaction, a portion of which is to be raised between signing and closing to fund Viasat’s standalone growth expenditures,” the statement said. The combined company’s board will be increased in size from eight to 10, with one of the two newcomers being current Inmarsat chairman Andrew Sukawaty, and an as yet unnamed other appointed by current Inmarsat shareholders.

Concerns over regulatory approval follow the UK government’s decision to refer two recent deals involving British defence firms being acquired by American corporations to its Competition and Markets Authority. In August, the business secretary referred Ultra Electronics’ proposed acquisition by Cobham to the CMA, which is due to issue a report in January; the October announcement that Parker Hannifin had agreed to acquire Meggit plc also triggered an inquiry, again on security grounds, which is due to report in March. Inmarsat is presently owned by a private-equity consortium that includes one British, one American and two Canadian entities.

In their statement, the  companies highlighted the advantages a combined operation would bring to their customers, both in commercial and government/defence markets.

“Joining with Viasat is the right combination for Inmarsat at the right time,” added Inmarsat CEO, Rajeev Suri. “The combination will create a strong future for Inmarsat and be well-positioned to offer greater choice for customers around the world, enhanced scope for partners and new opportunities for employees. The industrial logic is compelling and ensures that the UK has a strong and sustainable presence in the critical space sector for the long term.” 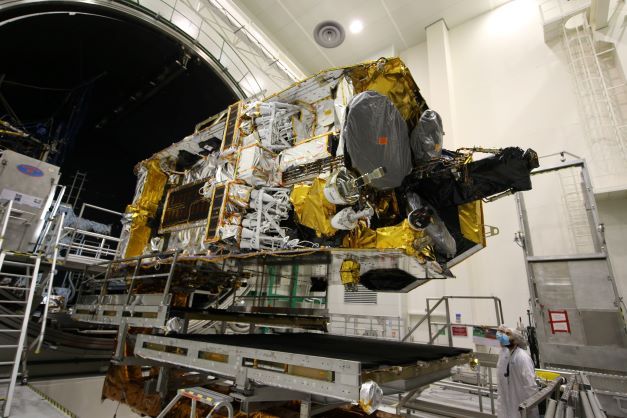 The first of Inmarsat's I-6 satellites, I-6F1, undergoing thermal vacuum testing in Toulouse. The satellite is due to be launched on 21 December. (Photo: Inmarsat)