Bell is into its sixth year to develop the V-280 VALOR as part of the Pentagon’s Joint Multi-Role Technology Demonstrator air vehicle capability, which will produce requirements for capability set 3 of the Future Vertical Lift programme, intended to replace AH-64 APACHE, UH-60 BLACKHAWK, AH-1 and other legacy-era rotary aircraft.

The first V-280 flight was last December. Since then the development regimen has deliberately quickened. When Mr. Flail met with MONCh on 26 September, the first aircraft had logged more than 60 hours of flight time and more than 150 hours of rotor turn time, and had achieved 250kts of true air speed and safely operated at 11,500 ft altitude – among other milestones.

The V-280 programme’s performance attributes and baseline technology successes are being used as a stepping off point to support Bell’s offering of the V-247 for the US Marine Corps’ Marine Air-Ground Task Force Unmanned Aircraft System Expeditionary (MUX) programme.

The V-247 remains a Bell internal R&D effort, is about two years old and from acquisition parlance is in preliminary design phase.

Mr Flail noted the MUX programme is envisioned to allow the V-247 to help the Marines close seven capability gaps including intelligence, surveillance and reconnaissance; cargo replenishment, precision strike and airborne early warning. The Bell programme official continued: “We’re looking to have all of that within one vehicle, so you have a ‘Swiss Army knife’ that is reconfigurable to all the missions that you need.”

While the V-247 prototype will fit in a prescribed UH-1Y foot print on the flight deck of an LHD-class ship, it can further fold up to ingress and egress a US Navy DDG-51-class hangar. As such, Bell further envisions V-247 as a possible replacement for the Navy’s MH-60R, and beyond that, a next-generation Army UAS and even a US Air Force personnel recovery helicopter. Mr. Flail added, “There’s also Special Operations Command interest.”

V-247 is conceptually designed to take off from a flight deck and loiter for 12 hours, fly 1300nm and engage a key target, “without having to refuel”, or fly out 350nm and loiter for eight hours. The Bell executive offered: “This is incredibly flexible in terms of what you need to be able to do in terms of speed, range, loiter and payload. When you get to all the ‘trades” associated with it you get to a vehicle of about this scale.”

The full-scale V-247 mock-up on display at MDM was “fully decked out”, so to speak, to permit Bell to show the state-of-the-possible and, in turn, stimulate and generate military customer and industry feedback.

With respect to a conceptual weapons load plan, the V-247 mock-up was fitted with Hellfire, JAGM and Fury missiles. Further supporting Mr Flail’s comments about a Swiss Army Knife construct, the V-247 was equipped with a refuelling probe and various payloads including a nose radar, LIDAR, tactical common data link, a distributed aperture sensor and a turreted sensor for targeting.

The VIGILANT’s cargo bay could conceivably house sonobuoys, smaller UASs to provide a swarm option, or other materiel.

While the V-247 is compatible with US Navy “large deck” amphibious ships and DDGs, it is also transportable in a US Air Force C-17.

As Bell is migrating lessons learned from the V-280 into the V-247 development process, Mr Flail noted stark differences between the two models. In one instance, whereas the V-280 is straight-winged, the V-247 has a minor degree of dihedral wing design. And while the V-247 and V-22 blades look similar at first glance, the Vigilant has enhanced blade technology to reduce the cost and complexity of the blade build.

In 2019, Bell will focus on advancing the V-247’s autonomy. “There’s an unprecedented level of autonomy in the V-247. When you look at all the other unmanned aircraft in the US DoD there’s significant human capital to run these systems. But we’re able to have a much more autonomous aircraft [with V-247], to operate in a GPS-denied environment, do aerial refuelling autonomously, and take off and land on the ship’s deck in significant sea state conditions, autonomously,” the Bell executive concluded. 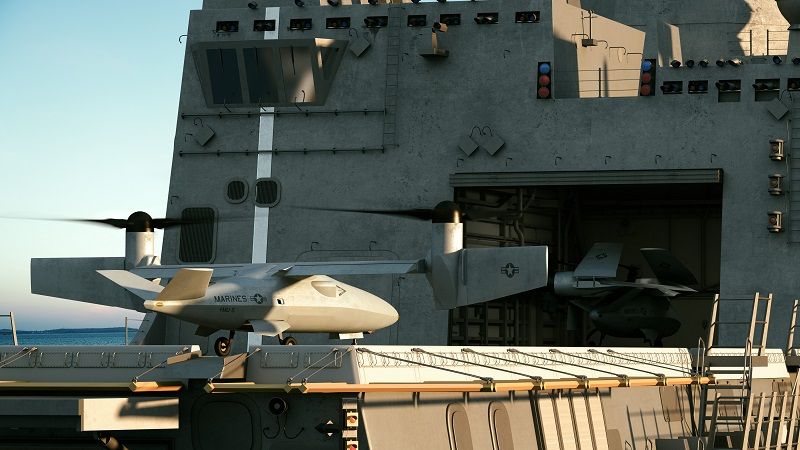