An investigation is underway into the towing failure of a newly-procured USMC Amphibious Combat Vehicle (ACV). The vehicle fell onto its side on 26 August, while being towed in the surf zone during an exercise at Camp Pendleton, CA, causing the Corps to suspend use of all ACV troop transports in water training.

Echoing an earlier statement, USMC spokesperson Maj Jim Stenger told MON “Out of an abundance of caution, the Marine Corps has suspended waterborne operations of the Amphibious Combat Vehicle (ACV) after identifying an issue with the towing mechanism. The Marine Corps is working on identifying and fixing the root cause of the problem.”

This level of caution comes after a USMC Amphibious Assault Vehicle (AAV) sank on 30 July 2020, killing eight marines and a sailor. An investigation found the causes to be poor training, a vehicle in bad condition and failure to follow safety procedures.

Although this latest incident involved a brand new ACV, the USMC wants to make sure all its training environments are safe. “Realistic training is a vital component of readiness, and the Marine Corps is committed to ensuring marines train under the safest conditions possible; this includes ensuring the functionality of vehicles and equipment,” explained Stenger.

This issue is believed to relate to the Sea Tow Quick Release mechanism, marines having reported an inability to actuate the quick release in operation, or an unexpected detachment of the tow rope. Marines regularly submit after action reports of training evolutions and operations, in which they describe the condition and performance of the equipment used. In this instance, a report from the field described the issue with the tow mechanism.

The USMC has accepted 54 ACVs into service so far, following their initial delivery and acceptance in September 2020. Delta Company used them for the first time in a war-fighting exercise in February.

BAE Systems is fulfilling the ACV requirement with a platform based on Finmeccanica’s (now Leonardo) SuperAV. The USMC requirement is for a total of 579 ACVs, potentially to increase to over 700. The first set of about 200 ACVs are all troop carrying variants, with other types to follow. 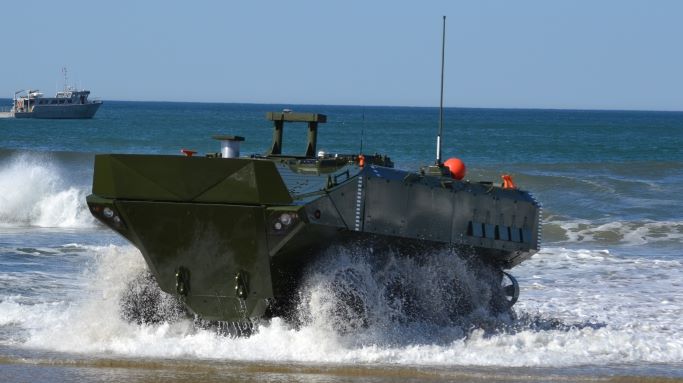 An ACV emerges into the surf zone. The type is currently being fielded at Camp Pendleton, CA. (Photo: USMC)
