PROTEUS comprises a suite of visual software training and experimentation tools that enables Marines, from squad to battalion level, to explore and develop novel multidomain fighting concepts. The tools allow Marines to integrate emerging capabilities and learn how to effectively employ them in realistic expeditionary combat scenarios.

“Using the PROTEUS software, Marines were able to visualize and manipulate their electromagnetic footprint, apply logistics support automation, and obtain quantitative analytics on the effectiveness of force packages and tactics in real time,” said John Paschkewitz, PROTEUS Program Manager in DARPA’s Strategic Technology Office. “PROTEUS brings the power of multi-domain force package and CONOPS [concept of operations] development to the platoon, company, and battalion. In terms of thinking about the future fight, where you have to be sensitive to your electromagnetic emissions or seek to employ unmanned assets in effective ways, PROTEUS is a powerful tool.”

PROTEUS has three core components. The first is a virtual test environment that serves as a tactical multidomain operations ‘military sandbox’ for experimentation and analysis across multiple echelons. Dubbed ULTRA, this synthetic environment aims to tap into and spur Marine creativity and judgment.

“Building a commander’s insight and judgment is driven by the fact that there’s a live opponent,” Paschkewitz explained. “We built ULTRA around that concept from day one. This is not AI versus AI, or human versus AI, rather there is always a Marine against an ADFOR [adversary force] that’s another Marine, typically, forcing the commander to adapt tactics, techniques, and procedures (TTPs) and innovate at mission speed.”

“PROTEUS enables commanders to immerse themselves in a future conflict where they can deploy capabilities against a realistic adversary,” added Ryan Reeder, Model and Simulation Director at MCWL’s Experiment Division. “Commanders can hone their battlefield skills, while also training subordinates on employment techniques, delivering a cohesive unit able to execute in a more effective manner. Another key feature is that the system generates data on critical leadership decisions during key friction points in the scenarios, providing the ability to replay and review time-stamped leadership decisions and then show the overall effects of the decisions.”

ULTRA depicts actual expeditionary urban locations in 3D, to take into consideration size of buildings and other terrain structures when generating novel concepts for UAS operations at under 1,000ft – which the tool was expressly built for –  as well as logistics route planning. The virtual sandbox uses Military Standard 2525 Joint military symbology that all Marines are trained on.

The second component is a dynamic composition engine called COMPOSER, that includes EMSO and logistics wizards that automate equipment loadout and plan development in real time. The EMSO wizard reviews a commander’s plan and provides feedback and guidance such as assessment of electromagnetic signature risk, assignment of communications assets to specific units and automatic configuration of tactical networks. The logistics wizard provides a similar evaluation and logistics picture identifying chokepoints and space and time distribution of assets – such as JLTVs and unmanned systems – to ensure coordinated movement in the air, on ground, and from the sea. Both wizards build on foundational technologies developed in DARPA’s completed Complex Adaptive System Composition and Design Environment (CASCADE) programme.

“Without the EMSO and logistics wizards, it’s hard to effectively coordinate and execute multi-domain operations,” Paschkewitz observed. “Marines can easily coordinate direct and indirect fires, but coordinating those with spectrum operations while ensuring logistical support without a staff is challenging. These tools allow Marines to focus on the art of war, and the automation handles the science of war.”

The third component of PROTEUS is the Parametric Data Service (PDS), which ensures models, maps, and other elements of ULTRA and the COMPOSER wizards are authoritative. PDS harvests data from official USMC sources so that radio specifications, vehicle parameters, weapons ranges, etc. reflect actual capabilities.

The PROTEUS capability is deployed in a self-contained, portable kit that transports easily. It comes with its own cloud-client server system, so a host internet connection is not required for smaller demonstrations.

“The portability of the PROTEUS kit has been essential to us getting the capability to where Marines train,” Paschkewitz said. “It’s been great to see a communications or radio battalion Marine sit next to an Infantryman on PROTEUS computers and be able to understand each other, plan, and execute in innovative ways.”

“The PROTEUS capability allows for virtual integration in the early stages of experimentation to derive and refine tactics, techniques, and procedures and establish standard operating procedures prior to executing a live experimentation – reducing risk, cost, and supporting analytical findings throughout the entire process,” Reeder said. “The lessons learned are easily carried over to live-force experimentation where units can apply these skills in realistic scenarios, enhancing outcomes and data quality.”

PROTEUS is currently a force design and experimentation tool, but its value could expand to operational planning if real-time intelligence feeds and an Android Tactical Assault Kit (ATAK) connector were incorporated in the future. The software currently has an application programming interface (API) to interface with the SquadX Virtual Testbed used in DARPA’s Tactical Technology Office SquadX program, facilitating planning and rehearsal.

“While PROTEUS, as it is transitioning, will help Marines develop future warfighting concepts, one can imagine a future tool based upon PROTEUS being used in operations,” concluded Tim Grayson, Director of DARPA’s Strategic Technology Office. “For example, as part of the Marine’s new island-hopping Expeditionary Advanced Base Operations concept, a PROTEUS-like planning tool could be used to tailor elements of this type of distributed force to the particular need at hand, based upon the resources that are available at that moment in time.” 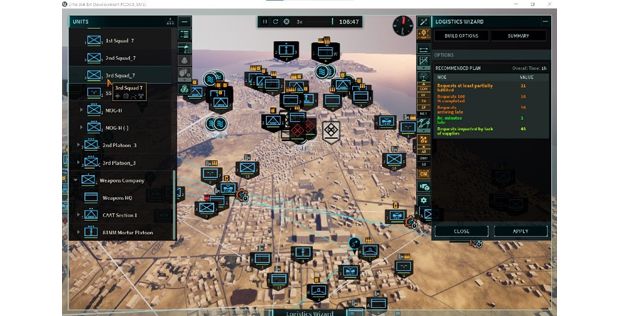 PROTEUS aims to enable Marines to practice the art of war. (Image: DARPA)