The US Marine Corps (USMC) has been supporting combat operations in Afghanistan and Iraq for the better part of two decades. The service’s FY2017 budget of approx. U$24 billion (€21.4 billion) provides a delicate balance, permitting the Marines to invest in new aircraft and vehicles and to upgrade legacy-era weapons platforms. At the same time, the service is also modernising its weapon inventory, C4I systems and other materiel.

Any discussion about current and future USMC weapons platform and other equipment programmes has to be prefaced by future amphibious lift considerations – literally providing the combat cargo “square and cubes” for large unit seaborne tactical and strategic movements. To that end, Bill Glenn, Manager of Media Relations at Ingalls Shipbuilding Communications, provided MT with an update on two US Navy (USN) amphibious programmes designed to allow Marines to project power from the sea well into this century.

Beyond ships, the Amphibious Combat Vehicle (ACV) programme has been gaining momentum over the last 18 months – even from the perspective of a somewhat rigid Pentagon acquisition system. The programme has two phases, 1.1 and 1.2. ACV 1.1 is in its engineering and manufacturing development phase, with SAIC and BAE Systems delivering their prototype vehicles.

A flurry of activity is occurring in Marine Corps aviation programmes, from those on the future side of the ledger to those maintaining operational readiness of the legacy force airframes. One down-range effort is the Marine Air-Ground Task Force (MAGTF) Unmanned Expeditionary (MUX) requirement. MUX will be a Group 4 or 5 (above 1,320lbs/599kg) long-range, long-endurance UAV that can operate both from ships and smaller-footprint, expeditionary locations. The new capability is envisioned as being able to conduct surveillance, strike, electronic-warfare and cargo missions.

This April, Lockheed Martin announced the Sikorsky King STALLION programme had successfully passed its Defense Acquisition Board review and achieved a Milestone C decision that enables low rate initial production (LRIP) funding. As of 8 June, the Pentagon’s programme of record remains at 200 CH-53K aircraft. The first six of the 200 are under contract and scheduled to start delivery next year to the USMC. Two additional aircraft, the first LRIP aircraft, are under long lead procurement for parts and materials, with deliveries scheduled to start in 2020. A Marine Corps statement reads, “The CH-53K will be considered the most powerful helicopter in the DoD and is scheduled to completely replace the CH-53E Super STALLION by 2030”.

The service remains focused on another part of its aviation portfolio – maintaining operational readiness for its legacy platforms. In one instance, the USMC and its Bell-Boeing industry team are enhancing the mature MV-22 OSPREY programme to support more rigorous missions. The service’s programme of record remains 360 MV-22s.

One of the service’s beleaguered programmes in terms of operational readiness remains the F-18, of which the USMC has around 280. Years of deferred and under-investments in Boeing F/A-18 maintenance and other life cycle support – while service leaders expected a quicker delivery rate of F-35Bs – have taken a toll. The numbers of airframes reported mission ready – ready to fight – varied between 72 and 80 through this spring’s congressional hearing season on the Trump administration’s FY 2018 Pentagon budget request. The remainder were in long-term maintenance and shorter-term maintenance availabilities.

Insitu Defense’s RQ-21A BLACKJACK is an expanding foundation of the service’s UAS programme. As of May 2017, Insitu delivered 14 RQ-21A systems to the service and is on schedule to deliver one system per month to meet its current contract. A system consists of five air vehicles.

A confluence of more lethal threats to vehicles and their crews and the quickening pace of events during manoeuvre from the sea operations and ground missions are compelling the USMC to invest in new vehicle fleets.

The USMC’s quest for “lightening the load” for the Marine Air-Ground Task Force extends into the C4ISR sector. Cubic Corporation’s Cubic Mission Solutions (CMS) Division, which includes GATR, DTECH, Teralogics and Vocality products, is helping to complete that mission.

To read more, please find the full article (which includes news on the Lockheed Martin F-35B LIGHTNING II, Oshkosh Defense JLTV, BAE Systems’ APKWS and much more) in MILITARY TECHNOLOGY #9/2017, available at the show or here. Marty Kauchak is at Modern Day Marine 2017 bringing you the latest news from the show. 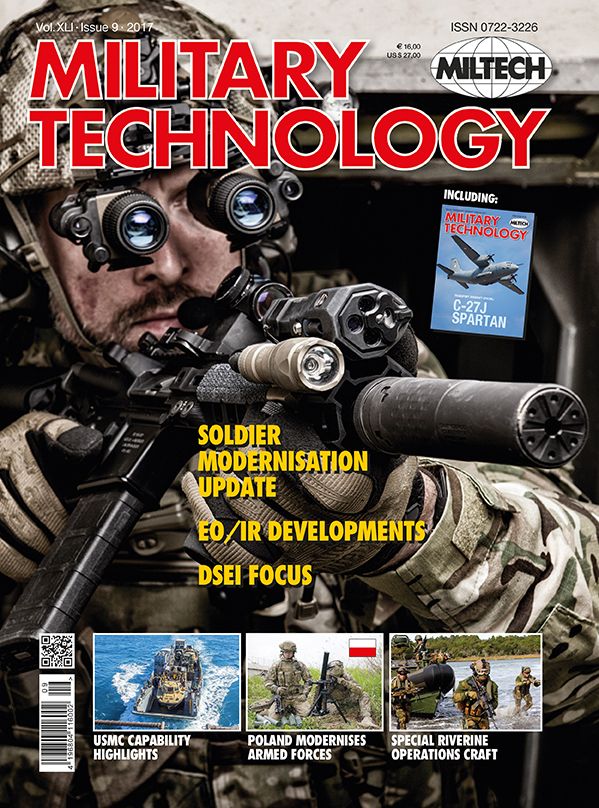