Citadel Defense has been awarded three new C-UAS contracts by the US government for its Titan Drone Finder (TITAN DF) solution, the company announced on 28 September.

TITAN DF allows operators to locate a drone, track its flight path, and autonomously neutralise threats that cross a user-defined alert zone.  “We take every measure to compress the time and space required for operators to make a decision and take action against a threat in their airspace,” explained CEO, Christopher Williams.

Citadel’s rapidly-growing family of TITAN C-UAS systems features levels of automation that create operational advantage for soldiers on the front lines.  When defending against swarms and difficult-to-detect threats, AI-powered combat systems, such as TITAN, allow operators to identify and terminate enemy UAS threats with unmatched speed, accuracy, and reliability. “Machines can perceive, decide, and act more quickly and accurately than humans in complex environments.  Citadel solutions autonomously clear the airspace of UAS threats, keeping servicemen and servicewomen available for other important tasks in high-risk and resource-constrained environments,” explained Williams.

Results from recent government-sponsored CUAS evaluations accelerated the contract awards. Matt England, Chief Growth Officer at Citadel stated, “In deployment overseas and in the US, users of TITAN continue to unilaterally confirm the system outperforms competing [RF] C-UAS capabilities at fixed, mobile, and in dismounted operations – all at a lower cost that enables scaling of force protection where it is needed.” 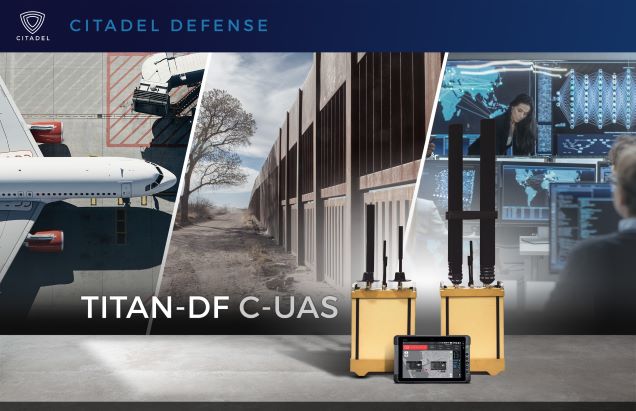 Citadel’s TITAN DF is now being fielded by US military and government operators. (Image: Citadel Defense)