Ex-Pakistani Army Aircraft to be Used for Counter-Narcotics Operations

Five UH-1H HUEY 2 helicopters, donated by the US government, arrived at the Colombian Army’s Tolemaida base on 22 April, on board a USAF C-17.

Previously used supporting operations in Afghanistan by the Pakistan Army Aviation Corps, the aircraft are destined to be used by the Brigade Against Drug Trafficking in the Guaviare, Tumaco, Catatumbo and the Serranía de la Macarena areas, where the government has decided to restart operations spraying glyphosate on coca plantations. The helicopters will provide security to these operations, with instructions to fire if the aircraft are fired upon. 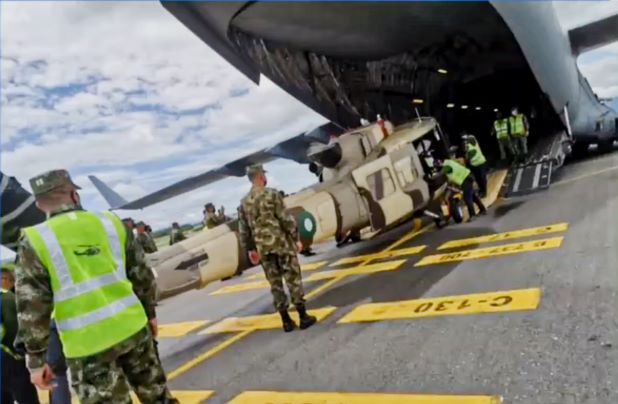 Still sporting Pakistani Army Aviation Corps colours, one of the HUEYs is disembarked from the C-17 GLOBEMASTER III at Tolemaida. (Photo: Colombian Army)