US Army to Evaluate TROPHY on STRYKER

Smaller, Lighter Version to be Tested

A special version of Rafael’s TROPHY active protection system (APS) is to be trialled by the US Army in May-June next year for the service’s STRYKER armoured vehicle, according to an Israeli MoD statement.

Rafael says the Army – which has already equipped four ABRAMS MBT brigades with TROPHY, delivery of which was completed earlier this year – is now considering installing the combat-proven system on a wider scale. “Our system is lighter than other systems and, most important, combat-proven in very complex combat scenarios of the Israeli defense forces,” according to Guy Bitton from Rafael’s Land Maneuver Systems Directorate.

The contract was awarded on an ‘urgent need’ basis: Rafael, and partner Leonardo DRS, delivered the first systems for the Army and Marine Corps in September 2019, with a joint government/industry American/Israeli team working to adapt and integrate TROPHY for the two service’s ABRAMS variants.

Developed by Rafael in response to continued proliferation of anti-armour threats, TROPHY provides mature, combat-proven protection against rockets and missiles, while simultaneously locating and reporting the origin of the hostile fire for immediate response.

The version to be evaluated for the STRYKER is TROPHY MV, specifically designed for lighter vehicles and weighing 40% less than the standard systems – also showing savings in mass and cost. According to Rafael, the MV variant retains the same levels of performance as the standard TROPHY HV, due in large part to commonality of some of the major critical elements – sensor suite, mission computer, hard-kill mechanism and combat algorithms.

TROPHY – the world’s only fully-integrated, combat-proven APS – is installed on the IDF’s MERKAVA MBTs and NAMER APCs, as well as US ABRAMS and other combat vehicles such as CHALLENGER 2 and LEOPARD 2. It has achieved numerous interceptions, with zero injuries to crew or dismounts, or collateral damage, since its first operational interception in 2011. With over 5,000 successful field tests, the system has accrued over one million operational hours and is now in series production for 1,800 systems.

Leonardo DRS and Rafael, having completed initial deliveries to the US Army, remain under contract for continuing support and development work for future ABRAMS installations. Bitton told MON there is an even lighter version – the VPS – “lighter and smaller than the version installed on the MBTs.” This is under consideration, he says, for a broader range of combat vehicles, including the US Army’s Robotic Combat Vehicle (RCV). He also advanced the view that, while TROPHY is considered to be primarily a defensive system, it should also be viewed as having an offensive nature, since it allows ground combat assets to remain ‘in the fight,’ even when targeted with anti-armour systems. 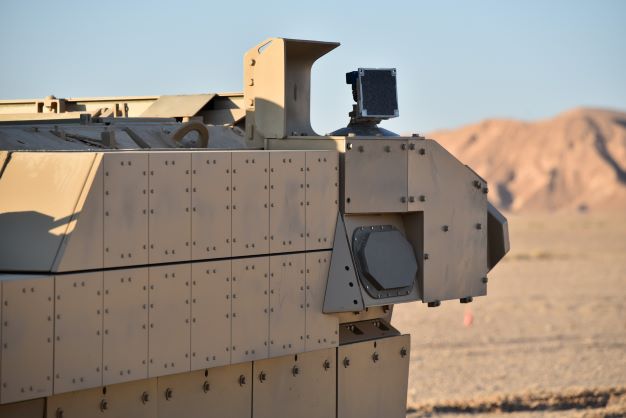 A TROPHY APS installed for evaluation purposes on a BRADLEY infantry fighting vehicle. (Photo via Rafael)