US Army Selects Palantir for TITAN

The US Army has awarded one of two prime contracts for development of the Tactical Intelligence Targeting Access Node (TITAN) to Palantir Technologies, Inc. The $36 million award is for the competitive prototyping phase, to build a prototype of the first Intelligence ground station enabled by Artificial Intelligence and Machine Learning (AI/ML), and will span 14 months.

TITAN brings together a variety of systems, technologies, and vendors to ensure scalability. Palantir’s Modular Open System Architecture (MOSA) will be the critical backbone that provides correlation, fusion, and integration of sensor data, alongside insights from AI/ML overlaid at the tactical edge. With TITAN, the Army will be able to merge data from a rapidly proliferating series of sensors, enabling frontline forces to gain situational awareness and make real-time decisions at transformative speeds. This effort is a critical enabler that advances the Army towards JADC2 and deters the near-peer threat.

“Now more than ever, the nation’s warriors and allies are being asked to make more decisions, at a faster speed, with more available data,” commented Aki Jain, President of Palantir USG. “TITAN is the crucial combination of the defense industry’s best technology from both emerging and enduring DoD partners.”

This award is a successful progression of the Army’s competitive software-centric approach to the January 2021 design phase of the TITAN programme, in which both Palantir and Raytheon were selected for a 12-month competitive effort. Both vendors will build a prototype in the next phase for evaluation and testing by soldiers and the community. As a non-traditional prime contractor, Palantir is committed in its approach to partnering with the nation’s best traditional and non-traditional partners, like Anduril Industries, L3 Harris, Pacific Defense, Sierra Nevada Corporation, Strategic Technology Consulting, and Worldwide Technology to build open and interoperable systems for the military operator at lower cost points. Palantir’s MOSA approach allows for easy integration of vendor capabilities, like SpaceX’s Starlink system or Forcepoint’s security offerings, to be quickly onboarded and offboarded as needed, ensuring the seamless collection and sharing of Intelligence across the Army, Joint Force, and intelligence community from joint, space-based, airborne and terrestrial sensors. 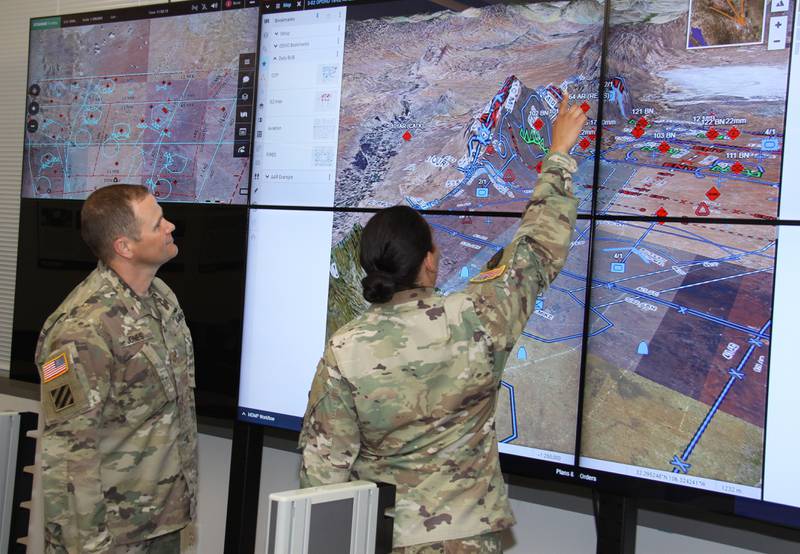 TITAN will significantly enhance data sharing and decision-making across the Army. (US Army)