Rafael Advanced Defense Systems (and its US subsidiary, Rafael Systems Global Sustainment (RSGS)) demonstrated the Spike Firefly loitering munition at the US Army Expeditionary Warrior Experiment 2022 (AEWE 2022) – a collaborative venue under the Maneuver Battle Lab of the Maneuver Center of Excellence at Fort Benning.

AEWE is the Army’s primary venue for small unit modernization, providing capability developers, Cross Functional Teams, PEOs, the Army Science and Technology (S&T) community and industry a repeatable, credible, rigorous operational experiment supporting both concept and materiel development. This year, the assessment soldiers from the Dutch and British armies, as well as US troops.

Over a two-day period, seven infantry squads were qualified in operation of the system, using inert rounds and an embedded trainer, following which force-on-force urban warfare scenarios were played out, deploying the munitions to support squad manoeuvres, while enhancing survivability, situational awareness, and lethality. The system was deemed a ‘disruptive product’ that allows a platoon a beyond line-of-sight engagement capability, with no need for external call for fire. The missile’s unique feature – it can be returned at any point prior to arming – allowed units to use it as a robotic point-man, scanning the streets, detecting and removing threats, while being able to call it back for another mission in the absence of detected targets.

“We learned a lot from the exercise and received positive feedback from the US Army operators. We truly believe the Spike Firefly brings another dimension to the infantry platoon’s urban warfare capability, by allowing decisive and lethal overmatch,” explained Joe Anderson, President & CEO of RSGS. It will be displayed at Modern Day Marine in Washington and SOFIC in Tampa.

“British soldiers from the Household Cavalry Regiment, experimenting on AEWE, found that a miniature loitering munition capability, represented by Firefly, could enable platoons to deliver effects that they currently rely on higher echelons for. Developing this type of technology will potentially allow commanders to place robotics and loiter munitions in harm’s way before committing humans: posing novel dilemmas to our adversaries, whilst protecting our soldiers – and this is particularly pertinent in complex terrains such as urban warfighting,” observed Maj Pete Guo from the British Army’s Infantry Trials & Development Unit.

For a video of the Spike Firefly, click here 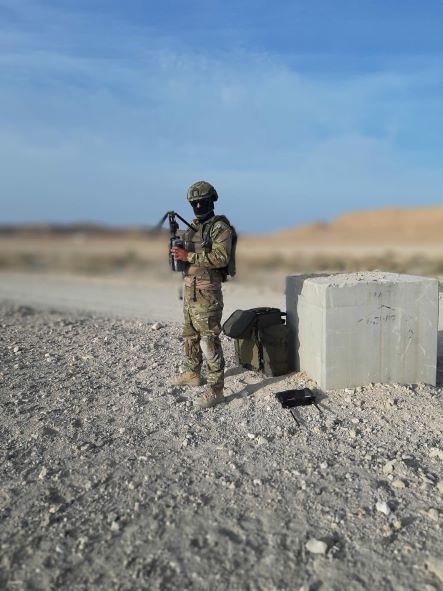