DoD Suggests Imminent Steps to be Taken to Impede Programme

North Korea’s latest two missile launches were aimed at testing a new type of ICBM, first unveiled during Pyongyang’s October 2020 military parade, according to the US DoD.

The Pentagon stated on 10 March that the purpose of these tests, which did not demonstrate ICBM range, was likely to evaluate this new system before conducting a test at full range in the future, potentially disguised as a space launch.

Pyongyang previously confirmed it had launched projectiles on 5 March and 27 February, but claimed they were intended to support indigenous development of a reconnaissance satellite. According to South Korea’s Joint Chiefs of Staff, the missile type flew about 300km at a maximum altitude of 620km during its first test, and 270km at a maximum altitude of 560km in the second, both of which appear to have been fired at a steep angle.

“While the DPRK [Democratic People’s Republic of Korea] chose not to publicise information on the systems involved in these launches, the United States is revealing this information publicly and sharing it with other allies and partners, because we believe that the international community must speak in a united voice to oppose the further development and proliferation of such weapons by the DPRK,” a Pentagon spokesperson stated. He added that the US strongly condemns the launches, which he described as a “brazen violation of multiple United Nations Security Council resolutions, needlessly raise tensions and risk destabilising the security situation in the region”. He also said that, while Washington remains committed to a diplomatic approach, it will continue to take “all necessary measures to ensure the security of the United States and our allies”.

Earlier this week, US Indo-Pacific Command ordered intensified surveillance activity in the Yellow Sea, as well as enhanced readiness among US ballistic missile defence forces in the region. Moreover, a US administration official said the US Department of Treasury would soon announce a series of new steps to help prevent North Korea from “accessing foreign items and technology that enable it to advance prohibited weapons programs“, according to the Yonhap News Agency.

During its October 2020 parade, Pyongyang showcased several examples of a new road-mobile ICBM, later dubbed Hwasong-17. The two-stage weapon, which appears to be liquid-fuelled, was shown being carried by a previously unseen 11-axle transport-erector-launcher (TEL) vehicle.

The new missile is larger than the previous Hwaseong-15 ICBM, which is carried by an 18-wheeled TEL and has an estimated range of 12,875km, based on its November 2017 test, meaning that it is “capable of striking any part” of the US mainland, according to US Forces Korea (UFSK). The larger size of the new ICBM suggests it has a greater range and/or payload than the Hwaseong-15, and that it may have been designed to carry multiple independently targetable re-entry vehicles.

The latest developments come after the US intelligence community warned in its 8 March Annual Threat Assessment that North Korean leader Kim Jong-un will continue efforts to steadily expand and enhance Pyongyang’s nuclear and conventional capabilities targeting the US and its allies. The authors assessed that Kim will periodically use “aggressive and potentially destabilising actions”, including the including the resumption of nuclear weapons and ICBM testing, “to reshape the regional security environment in his favor”.

The report also states “We assess that Kim views nuclear weapons and ICBMs as the ultimate guarantor of his totalitarian and autocratic rule of North Korea and believes that over time he will gain international acceptance as a nuclear power. He probably does not view the current level of pressure on his regime, the economic hardships resulting from sanctions and his domestic Covid-19 countermeasures as enough to require a fundamental change in approach”. 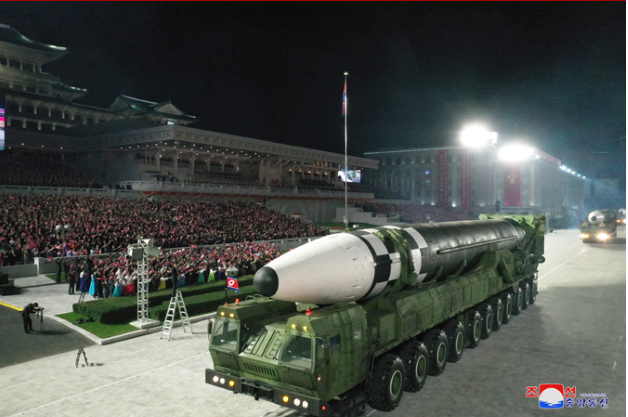 The Hwasong-17 during the October 20202 military parade in Pyongyang. (KCNA)