Russia’s primary tank manufacturer, UralVagonZavod (UVZ), has delivered another batch of T-90M main battle tanks and BREM-1M armoured recovery vehicles (ARV) to the Russian MoD, according to an August 4th announcement on the Rostec website.

This is the second T-90M delivery announcement this year, the first announced in May. The initial batch, in April 2020, reportedly entered service with the 2nd Guards Taman motorised rifle division of the 1st Guards Tank Army, and was followed by a second batch that November. Additional deliveries were announced in March 2021 when eight tanks were delivered to the 27th Separate Guards Motor Rifle Brigade of the same army. These first three deliveries totalled 26 tanks, according to UVZ Deputy Director, Vladimir Roshchupkin. Russia’s Deputy Minister of Defence also stated that 65 T-90Ms would be delivered to the Russian armed forces during 2021.

The T-90M is technologically Russia’s most capable tank; its mission systems and armour are superior to those of any other tank in Russian service. It is not clear whether the vehicles are entering service with frontline units in Ukraine. However, it is understood that many of Russia’s experienced and well-trained crews may have been lost or are being kept in reserve. It is therefore possible that, even if the tanks are deployed to Ukraine, they will not be used to their full potential.

The BREM-1M ARV is based on the T-90 hull and uses the same 1,000hp engine to generate a top speed of 60 km/h. It can tow a 52t vehicle, according to Rostec. A BREM-1M delivery was also announced in July this year, following one last December. Past reports from Russia’s logistics organisations lament the lack of dedicated repair and recovery vehicles during exercises. The war in Ukraine has thrown this deficiency into sharp relief, and Russian forces may have had difficulties recovering their damaged or immobilised vehicles.

Furthermore, the crane the BREM-1M carries is capable of lifting 20t tonnes, enabling it to support repair of battle-damaged vehicles. It is known that the Russian forces in Ukraine have established units for returning damaged vehicles to service, so the BREM-1M may be used to assist them.

The deliveries also raise a question over the status of UVZ, which has been reported to have ceased production several times since the war began. The deliveries do not necessarily prove that the company has run out of parts, or that it can manufacture vehicles indefinitely, as it may have procured sufficient parts for extensive T-90M production prior to the war. 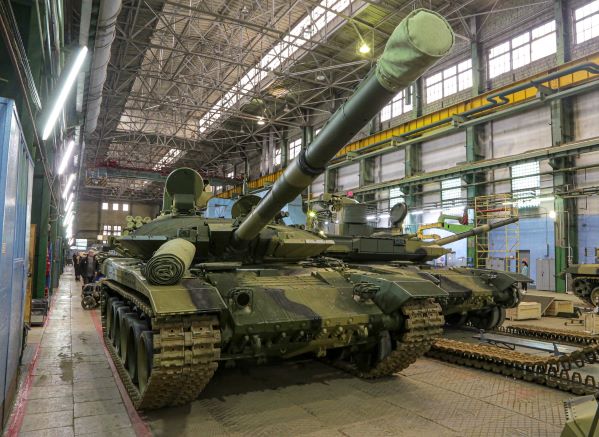 UralVagonZavod has delivered a second batch of T-90M tanks and BREM-1M recovery vehicles to the Russian MoD since the war started. (UralVagonZavod)