Unmanned vehicles across all domains are a mainstay of military operations now, and this is only set to increase over the coming years as the technology is further invested in and more nations look to acquire what is now considered a necessary capability.

By 2025, unmanned systems will continue to be operated as much if not more so than they currently are, as the benefits of taking the man out of the loop is recognised in all sectors, including air, land and naval forces, even into the commercial domain where there is a real boom in this technology that was once considered a high tech military asset.

Militaries internationally are looking towards increased endurance and new applications for unmanned systems over coming years, as well as introducing brand news systems to operations to which this previously would not have been possible.

Navies around the world are traditionally slow adopters of UAS, but are starting to realise that introducing this type of technology into operations will increase safety and reliability in such a testing operational environment.

They do typically operate a range of USVs or UUVs that allow them to survey threats on and sub-surface, which can remain at sea for long durations without being disturbed.

However, it is in the air domain that navies are finding integration of unmanned systems more challenging, specifically onboard vessels.
One of the largest developments in this domain is the US Navy’s (USN) new carrier-based fixed-wing UAV acquisition, which after a number of programme modifications is now the MQ-25 STINGRAY competition that is seeking to acquire a vehicle that will be able to refuel manned fighters.

Four bidders were selected to pitch for the air vehicle element of the programme – namely Boeing, General Atomics Aeronautical Systems Inc. (GA-ASI), Lockheed Martin and Northrop Grumman – but the latter announced in October 2017 that it was withdrawing from the competition.

This was reportedly due to an inability to develop a system that met the criteria of the request for proposals that was released the same month at the cost required. This is despite Northrop Grumman’s experience as developer of the X-47B UCAV demonstrator, which the USN used as a precursor to what is now the Stingray programme.

Another prime requirement from navies is for VTOL UAVs, which are typically more easily integrated into ship-based operations than fixed-wing examples.

Australia announced in February 2017 that it had awarded Schiebel a contract to provide its CAMCOPTER S-100, so that the navy could assess its requirements for this type of capability under its NMP1942 project.

This effort will be followed by the SEA 129 project that will be a full scale acquisition of this type of capability for Australia, which is likely to see UMS Skeldar and Northrop Grumman also pitch for in addition to Schiebel.

Furthermore, Germany has also been exploring the use of this technology for ship-based operations for some time, and in December 2017, UMS Skeldar announced that it has completed a week of trials of its R-350 rotary-wing UAV alongisde partner ESG for the BAAINBw.
The UAV carried both a light detection and ranging sensor as well as an EO/IR camera during the testing, performing automatic landing site recognition for manned rotorcraft beyond line of sight.

The US Army is the largest operator of UGVs and is looking towards the next generation of systems that it will operate.
It awarded Endeavour Robotics a contract for the Man Transportable Robotic System Increment II (MTRS Inc II) programme in early October 2017, which will be delivered over the coming two years.

This will be a robot that sits in the 165lbs weight category, and while new, it will be based on systems the company has already developed, carrying out counter-improvised explosive device operations, chemical and biological weapon detection, and route clearance.

Endeavour Robotics is also offering vehicles for the army’s Common Robotic System – Individual (CRS-I) programme, which will have a similar mission set as MTRS Inc II, but weigh just 25 pounds. An RfP has been released and a contract award should be made in 2018.
After winning a, “highly competitive bid process,” the company won a contract in Germany for 44 FirstLook throwable UGVs once it proved that it met the German government’s requirements. “I’m really proud of the work our team is doing,” Endeavor President, Tom Frost, said at the time. “The FirstLook is a critical tool used globally to keep soldiers and first responders safe from lethal threats. We are pleased to deliver the same critical capability to our allies in the German government.”

Another new system to the market is the 342kg T7 that was introduced by Harris in 2017, which is being acquired by the British Army under its Project Starter.

The multi-purpose UGV is being pitched to a number of different markets for different applications including military and law enforcement, and features haptic feedback and multiple sensor options. “T7 as a base system is a multi-purpose, flexible platform, and its first win with the UK was an EOD win does tend to focus us, but we have received interest for this type of robot for [countering] CBRN threats and HAZMAT,” Paul Bosscher, Chief Engineer for Robotic Systems at Harris, told MONCh. “The platforms need to be a bit more tough for the military customers than they do for the police.”

Bosscher noted that there is a requirement for commonality across these types of operations, and one country Harris is looking at a joint buy across military and law enforcement units, so that common equipment and training can be applied for these types of operation.
“Not everyone uses robots the same way; some prefer a small robot because it is a set of eyes and ears only, and if you are just trying to get a camera in a room, why would you need something more than fits in a backpack?” he added. “It is certainly not going to be the one size of robot that works for all customers. With the larger robots you have the added capability in terms of reach and strength, which allows you to deal with in the case of the explosive ordnance type mission, it allows you to deal with vehicle-borne IEDs, which is something you can’t do with a small or medium robot.”

In terms of unmanned systems used in the air domain for land operations, endurance and increased capability are driving development.
On the US side, in October GA-ASI announced in October 2017 that it was transitioning its MQ-1C GRAY EAGLE production line to a new extended range (ER) variant, so all future models will have an endurance of in excess of 40 hours.

The company says that its investment in composite tooling allowed it to start production of this variant ahead of schedule, and this line ran in parallel to the baseline MQ-1C. The first four ER variants were being used for development testing and an operational test and evaluation is expected to take place in spring 2018 ahead of deliveries to the army in summer of that year.

“We are proud of our many years of effort to complete the factory build of 165 MQ-1C Gray Eagles for the US Army,” David R. Alexander, President of Aircraft Systems at the company, said. “We’re now focused on delivering the Gray Eagle ER and believe its endurance and other improved capabilities will be a game changer on the battlefield.”

The US and other international forces operate the Textron Systems SHADOW UAV, meanwhile, and in June 2017 the company unveiled the new satellite communications-enabled NIGHTWARDEN variant. Derived from the company’s developmental M2 version, the UAV benefits from multiple and increased payload options, including weapons such as the company’s FURY glide munition.

While there was little need for a military asset such as a UAV to fly outside of operational theatres during the Iraq and Afghanistan conflicts that took place earlier in the century, current and future operations are not going to be held in such organised and controlled military environments.

There is more need therefore for UAVs to operate in airspace shared with other manned assets that are not necessarily military aircraft, so there is a push to integrate these aircraft into national airspace. To this end, GA-ASI has developed a new version of its ubiquitous PREDATOR family of MALE UAVs, which will have airworthiness standards that will allow it to be flown in airspace alongside standard air traffic. Dubbed the SkyGuardian, the developmental variant is being acquired by the RAF to replace its 10-strong incumbent fleet of Block 1 MQ-9 REAPER variants under its Protector programme.

The RAF is due to operate an armed variant of the new UAV, which will be delivered in the early 2020s following type certification that will be carried out over the coming two years. The type was first flown in November 2016, and in May 2017 achieved an endurance flight of 48.2 hours. The company is also pitching a maritime patrol variant called SeaGuardian, which is designed to support open-ocean and littoral surface surveillance, it says.

Unmanned systems were once a niche capability that disrupted military operations, and while it is still the case that they are offering an alternative to manned operations that provides a safer and more effective way of carrying out a mission, they are no longer considered a new and innovative technology in the same way they once were.

They are now very much being considered in fleet planning across all domains, with new capabilities coming to bear, as well as developments to existing systems that are already proving their worth on the battlefield.

Rather than this being a novel way of carrying out operations, the safety and efficiency that comes with unmanned systems has proven its worth now, with militaries the world over now looking to new ways of using this technology into the next decade, rather than considering it a new technology in itself.

Beth Stevenson is a senior defence reporter and a regular contributor to MT. 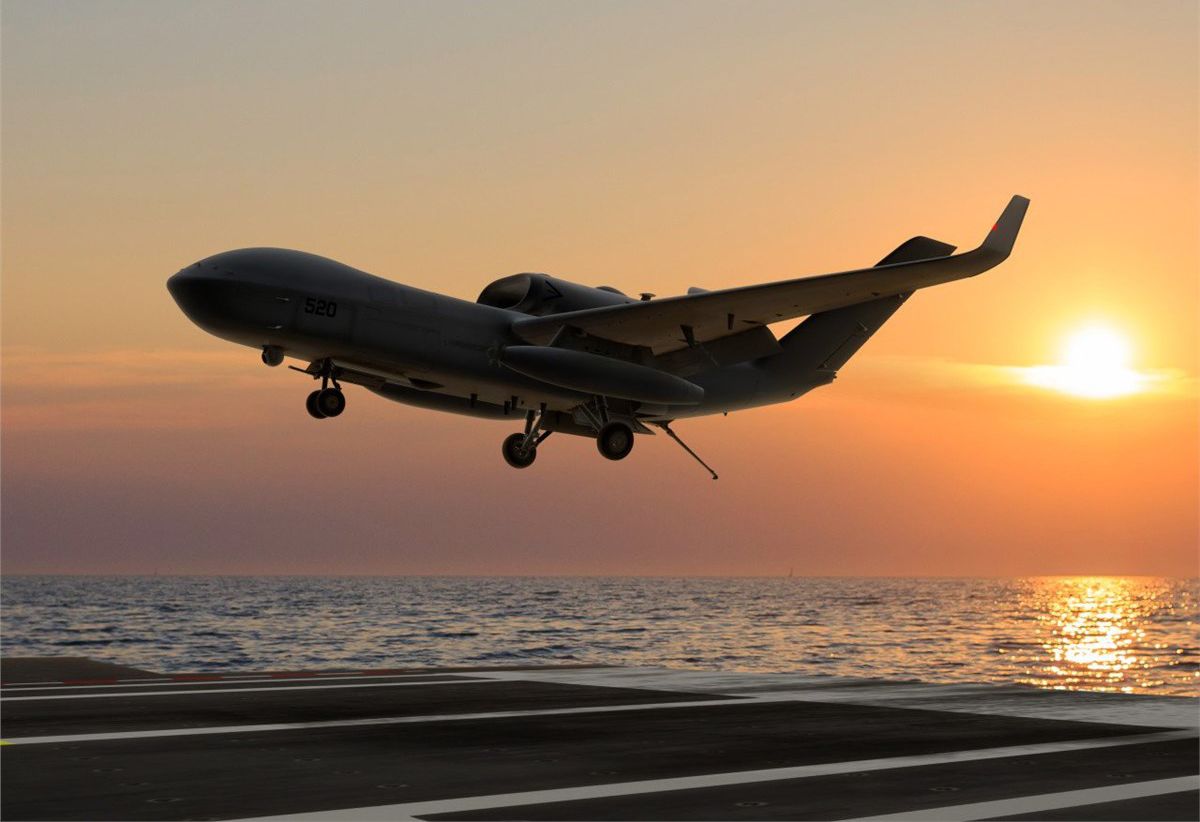