A UAV consultancy and a technology integrator have teamed up to create a ruggedised, suitcase-sized system that can control as many as 55 UAVs at once.

Liteye Systems are supplying the hardware to ruggedise the new AIR COMMONS – SWARM system developed by Unmanned Experts, a consultancy also based in Colorado, founded by a former RAF PREDATOR and REAPER pilot.

AIR COMMONS – SWARM is described as a drone swarm “asset planning, management and control system“. It enables mission planning and the generation of what Unmanned Experts call a Swarm Air Tasking Order. The system will allow swarm commanders to “deploy overwhelming autonomous airpower faster than the enemy’s decision-making cycle.”

The AIR COMMONS architecture allows the system to integrate into existing and under-development air traffic control, unmanned air traffic control and advanced air mobility traffic management systems, suggesting that it will have applicability beyond military users. The companies note that the system could be used to provide air domain awareness in a disaster-response scenario or within any deployed area of responsibility.

Unmanned Experts’ CEO, Keven Gambold, says the system “has demonstrated control of 55 drones and this number continues to increase.” In the solution developed by Liteye, the system is installed in a single ruggedised, portable crate and can be set up quickly in a remote location. 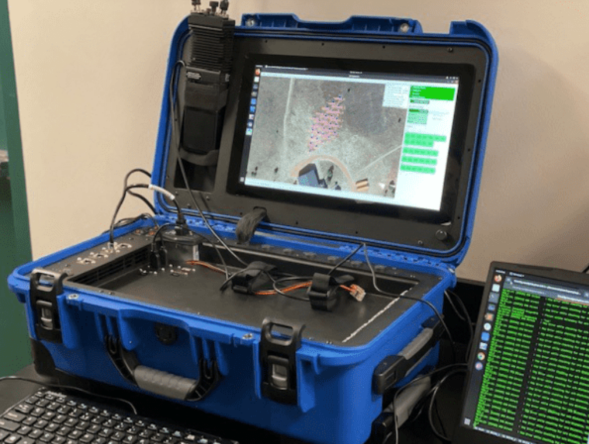