Unity is Strength – Biden at NATO

Suggests Russia be Excluded from G20

Unity is (against Russia) strength, especially with the help of sanctions – one of the principal points conveyed by US President Biden after the extraordinary meeting of NATO leaders in Brussels on 24 March.

The message was meant to emphasise the imperative to tighten Western ranks vis-à-vis the Russian invasion, and to hold firm on the sanctions front, despite the possible ‘boomerang’ consequences. “The single most important thing is for us to stay unified and the world continue to focus on what a brute this guy is,” Biden said.

And then there are sanctions. “Sanctions never deter anyone,” Biden admitted, “but the maintenance of sanctions is increasing the pain”. And if this continues “not just for the next month […] but for this entire year, that’s what will stop it”. To minimise the temptation for countries to violate them, he announced that NATO will set up a system to look at violators.

In addition to sanctions, isolation from international fora is also of paramount importance. In this regard, Biden said that Russia should also be banned from the G20. However, he reflected, this option may not be feasible, due to opposition from other countries. An alternative solution, he suggested, might be to have Ukraine participate in G20 meetings.

Turning to chemical weapons, one of the infamously ‘hot’ topics during NATO talks, the US president said that, in the event of Putin’s use of chemical weapons, “NATO will respond,” without elaborating further. The nature “of the response will depend on the nature of the use […] whether or not NATO would cross [the line of a military intervention] ..we will make that decision at the moment“.

Meanwhile, NATO activated its defence elements – chemical, biological, radiological and nuclear – to protect Ukraine, while the Alliance’s battlegroups are being reinforced with similar defences.

Biden also spoke about China, America’s current global competitor, amid worries that Beijing could decide to provide support to Russia. Last week, Biden urged Beijing not to provide aid to Russia. “I’m sure [Xi Jinping] understands the consequences of helping Russia […],” he said. “I made no threat [to him] but I did point out the number of American and foreign companies that have left Russia as a result of barbaric behavior [afterall, China understands that its economic future is much more closely tied to the West than to Russia. I am confident that it will not engage“. 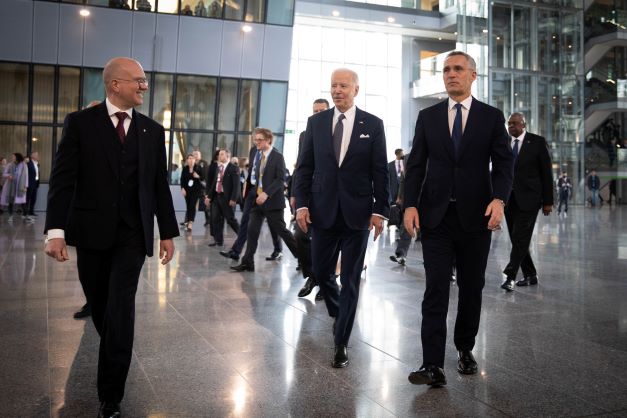