Ukraine is deploying 8,500 additional personnel to its border with Belarus, in order guard against any illegal migration. The decision, taken by the National Security and Defence Councils, was announced by Minister of Internal Affairs, Denys Monastyrskiy, during a visit to the border area on 11 November.

The additional forces will include 3,000 personnel from the State Border Guard Service, 3,500 from the National Guard and 2,000 National Police, as well as 15 helicopters, he announced. The move is intended to prevent potential repetition of the situation engineered on the Polish-Belarusian border. However, the head of Ukraine’s State Border Guard Service, Serhiy Deyneko, emphasised that, at the time of Monastyrskiy’s visit, there was no threat to Ukraine from the border with Belarus.

Thousands of asylum-seekers and migrants have been trapped between the Polish and Belarussian borders since 8 November, following the deployment of 12,000 Polish troops to the border. Lithuania, Latvia and Poland have reported increased numbers of migrants from the Middle East and Africa in the lead up to the event.

The EU has placed the blame on Belarus’ President Lukashenko, claiming he has orchestrated the mass movement of migrants in retaliation for sanctions placed on him and his network in 2020. A similar event occurred in 2015, when 5,500 migrants crossed the border between Norway and Russia, exploiting a legal loophole that allowed them to cross the border on bicycles.

As mentioned by Deyneko, however, it is not yet clear that Ukraine faces a similar threat from Belarus. Furthermore, reports from the Baltics and Poland indicate that there would be warning signs before a situation did develop on Ukraine’s borders. The country’s rapid and considerable response likely reflects its past experience with Russian troops in Crimea, where a delayed and poorly coordinated response led to the loss of the peninsula. 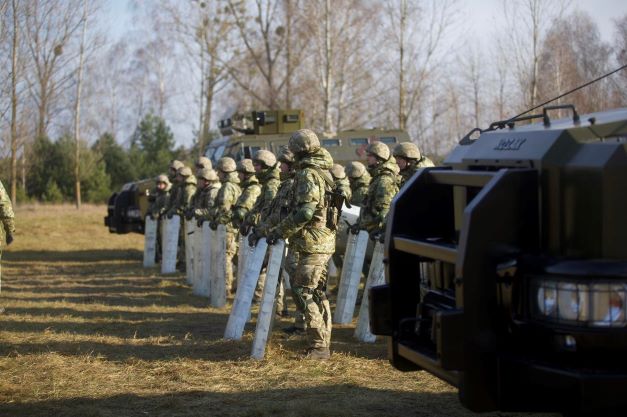 Ukraine has mobilised 8,500 additional personnel to guard its border with Belarus, as a situation develops on the Polish-Belarusian border. (Photo: Ukrainian Ministry of Internal Affairs)