Protection of British Interests and Capabilities in Space

Standing up Space Command is a crucial step in ensuring protection of Britain’s interests and capabilities in space. It builds on the commitment, outlined in the recent Defence Command Paper, to invest an additional £1.4 billion (€1.64 billion) in space over the next decade. “As our adversaries advance their space capabilities, it is vital we invest in space to ensure we maintain a battle-winning advantage across this fast-evolving operational domain,” commented Minister for Defence Procurement Jeremy Quin.

“The space domain is vital, not just in enabling military operations across the world, but in the day to day lives of everyone across the nation. With our new headquarters officially open, UK Space Command is now on the path to lead UK space operations to protect UK and allied interests in space,” stated AVM Godfrey.

The command also carries the UK’s commitment in the Combined Space Operations initiative – comprising seven nations: Australia, Canada, France, Germany, New Zealand, UK and the US – which seeks to improve cooperation, coordination, and interoperability opportunities in space, with significant efforts focussed on ensuring a safe, secure and stable space domain. 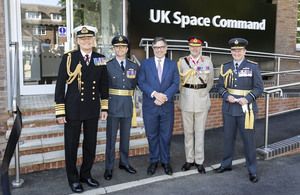