The UK’s fleet of SENTINEL R1 aircraft is to be sold to a US-based consortium, provided at least one of the five aircraft can be restored to flying condition, a government minister has said.

In a 30 November written answer in Parliament, Minister for Defence Procurement, Jeremy Quin, confirmed the retired fleet will be sold to a consortium consisting of Springfield Air, Raytheon US and Bombardier. “The aircraft are not currently in an airworthy condition and the potential receipt to defence will depend upon the ability of the consortium to regenerate and fly at least one aircraft,” Quin said, declining to reveal the value of the proposed sale as to do so “may prejudice commercial interests.”

The five aircraft are modified Bombardier GLOBAL EXPRESS business jets fitted with Raytheon synthetic aperture radar/ground moving target indicators and operator workstations capable of analysing data on board. When originally offered for sale by MoD, the Sentinel fleet was described as being suitable for harvesting for spares, and were advertised specifically as “not for reuse“.

Quin’s statement that at least one aircraft will have to be able to fly before the sale completes suggests that the fleet is now being sold for potential reuse. The consortium’s membership appears to underline this likelihood. Bombardier is the aircraft OEM, and Raytheon was prime contractor for the modifications and supplied the sensors (though much of the conversion work, and the ongoing checks and maintenance, was carried out at the company’s UK-based ISR division). Springfield Air is a jet charter provider operating Gulfstream and Cessna ITATION aircraft which, since 2018, has operated a special-mission capability. The company’s website says it “fields a cadre of seasoned special missions and air carrier experts, capable of supporting unique client requirements in developing countries.”

SENTINEL was acquired under a requirement generated during the Cold War and envisioned as a means of providing long-range reconnaissance over continental Europe. After its introduction in 2008, the platform became pivotal to British air operations in Afghanistan, where its ability to map patterns of life on remote roads assisted in identifying areas where insurgents had placed IEDs. A planned upgrade was cancelled as part of the government’s 2010 defence review, which scheduled an early retirement for the fleet. However, the aircraft were soon thereafter in heavy use over Libya, where they proved vital in helping commanders understand the location and direction of movement of an always-changing frontline. SENTINEL flew operationally in every UK campaign conducted during its time in the RAF inventory, but the necessary upgrade programme was never funded.

In the 2015 defence review, the system was given a third and final out-of-service date (OSD) of March 2021. In an earlier written answer in June 2020, Quin said that “SENTINEL’s radar and mission system are now increasingly obsolescent and will face increasing reliability issues as time progresses. Retaining the capability would have required significant upgrade expenditure … It is necessary to retire certain capabilities at planned OSDs to allow re-investment in future capability.” The fleet was retired in March. Although some aircraft still in RAF service can carry out parts of the SENTINEL mission set, the UK does not have a replacement capability. 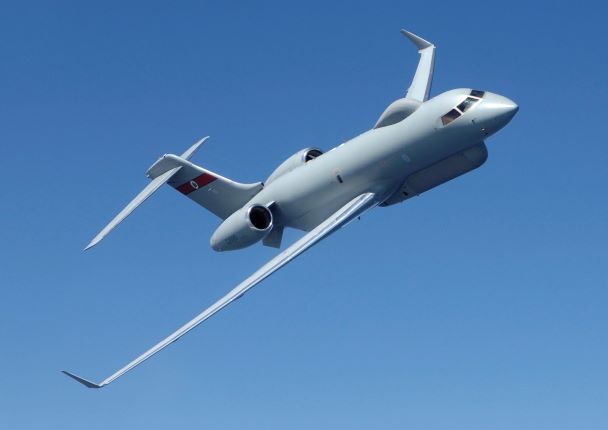 The former RAF SENTINEL fleet may be returning to the skies. (Photo: MoD/Crown copyright)