“The launch of the International Crimea Platform signifies the global community’s recognition of the hugely important need to keep pressing for the reintegration of Crimea as part of Ukraine, which the UK fully supports,” he told delegates.

The aim of the ICP is to re-integrate Crimea into Ukraine. Heads of State from Poland and the Baltic nations, and Foreign Ministers from countries including France, Germany, Spain, Italy and the UK attended. The ICP helped the global community coordinate on Crimea, increase the effectiveness of international response, increase pressure on Russia and step up efforts to end the illegal annexation.

The UK and NATO are committed to Black Sea regional security, stability and prosperity, alongside Ukraine’s territorial integrity and sovereignty. Putting context to that commitment, the UK has conducted joint maritime and land exercises, such as SEA BREEZE and COSSACK MACE with Ukraine, allies and partners this summer. Since 2015, London has trained over 21,000 Ukrainian military personnel in medical skills, logistics, counter-IED, leadership, planning and infantry tactics as part of Operation ORBITAL and the UK-led Maritime Training Initiative. 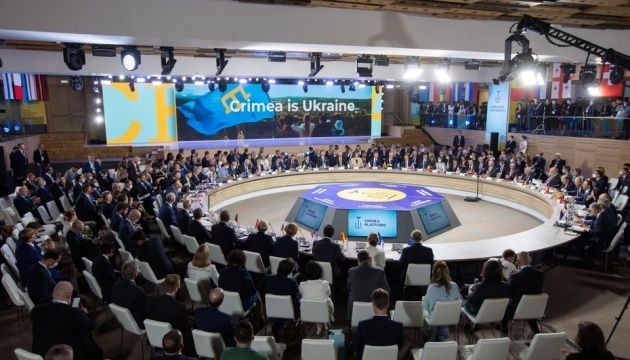 The inaugural ICP aims to heighten awareness and promote resolution of the illegal annexation of Crimea by Russia. (Photo: UKRINFORM)