The UK and US governments have announced a 10-year extension to the contract to support the Royal Air Force’s AIRSEEKER fleet. The new deal – worth some £970 million (€1.15 billion) – will see the three Boeing RC-135W RIVET JOINT signals-intelligence/electronic-surveillance aircraft through to their currently projected out-of-service date in 2035.

In a media release, the UK’s defence ministry highlighted that the contract extension will secure a number of jobs at RAF Waddington, where the fleet is based. Some 25 jobs are involved, “mainly” at Waddington, in technical and logistic support.

The contract is between the UK and US governments, and extends an MoU signed in 2010, when the UK opted for the RC-135W to replace its NIMROD R1 fleet. At the time, the AIRSEEKER programme was described by  MoD as “the most complex combined Foreign Military Sales case and co-operative support arrangement that the UK has undertaken with the United States Air Force since World War II.”

The support and sustainment agreement envisioned the three RAF-operated aircraft as part of a combined US/UK fleet of 20 airframes. Each of the three British aircraft are scheduled to return to prime contractor L3Harris Technologies in Greenville, TX, “for a complete strip down and refurbishment, together with a system upgrade every four years,” according to MoD.

“The Rivet Joint Cooperative Programme is a fantastic example of the UK/US special relationship and the support for our AIRSEEKER fleet has been extended for a further decade,” said Jeremy Quin, Minister for Defence Procurement. “With a commitment to invest almost £1 billion, this agreement will ensure that we, and our allies, can benefit from the aircraft’s impressive surveillance capability for years to come.” 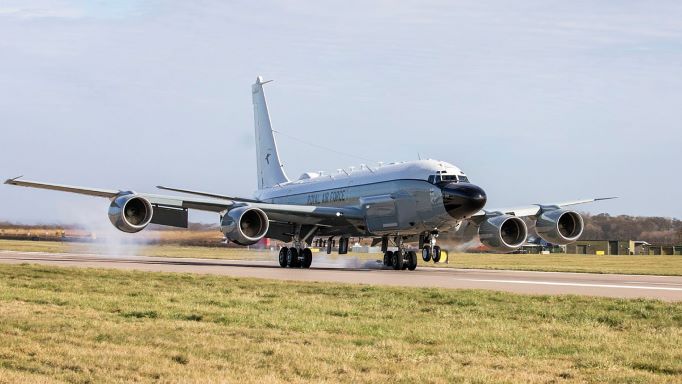 One of 51 Sqn's AIRSEEKERs at RAF Waddington. (Photo: UK MoD)