Defence Equipment & Support (DE&S – UK MoD’s procurement body) has established the Expeditionary Robotics Centre of Excellence (ERCoE), in collaboration with the British Army, to boost innovative development of robotic equipment and accelerate the implementation of operational advantage for the armed forces. The centre sits under the Future Capability Group (FCG) at DE&S, which has a direct line to market, ensuring ideas can be rapidly developed.

Bringing together robotics and autonomous systems experts from across government, academia and industry, the ERCoE will operate from MoD Abbey Wood in Bristol and from the Army BattleLab in Dorset, an innovative technology project announced in August last year. It will act as a focal point for current innovative projects, and also assess unexplored, high-risk but rapidly maturing technologies.

Projects to be investigated initially include Remote Platoon Vehicles, nano-UAS, autonomous resupply of forward troops and how defence forms human-machine teams. Open access to information and fresh ideas will ensure MoD can exploit the benefits these key disruptive technologies could present, whilst also facilitating the rapid growth of relevant expertise.

“The CoE concept was born out of the need and opportunity to bring together separate projects and people into single groupings, to be more efficient and effective. Being more effective means a razor-sharp focus on exploitation and operational advantage as the goal. Co-teaming between the Army and DE&S will put the customer at the heart of what we do, exploring and delivering iteratively under an ‘agile by default’ mindset. DE&S personnel will work alongside industry experts at the Army BattleLab within the Defence Innovation Centre, allowing new ideas and concepts to be quickly developed and put into practice,” explained FCG Head, James Gavin.

The ERCoE has been jointly launched with Future Force Development in Army HQ, and is aligned to its Robotics and Autonomous Systems (RAS) Strategy. The hub will initially focus on projects for the British Army, but there is optimism that, as the group expands and matures, it will become a central hub of advice for expeditionary robotics across the forces.

Lt Col Iain Lamont, SO1 Robotics and Autonomous Systems at the British Army, commented that “Driven by the Army’s RAS Strategy, this new agile approach will enable the delivery of several exciting new developments and ensure game-changing technology enters into service as early as possible, as we look to accelerate Army transformation.”

The ERCoE launch is a pathfinder within the recently launched DE&S Strategy 2025 and will pave the way for future delivery teams to maximise advantage from this capability. 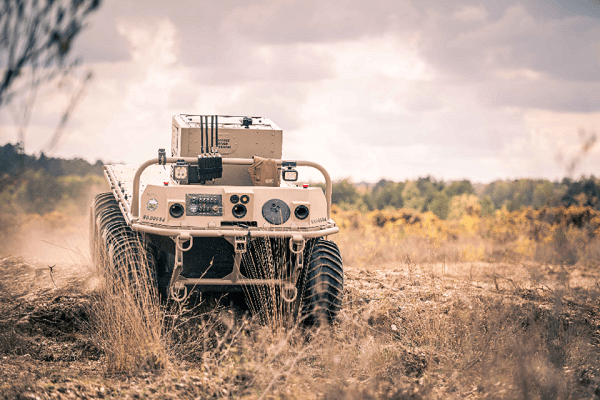 Initially, the Centre will focus on unmanned ground vehicle and nano-UAS projects for the army, but the expectation is that benefit will accrue to all the armed forces over time. (Photo: Jack Eckersley/MoD Crown copyright)