When not embroiled in a war of words with Russia as to whether or not Russia ‘scared off’ a Royal Navy vessel in international waters off Odessa this week, HMS DEFENDER has been quietly and diligently supporting British diplomacy and was the venue for signature on 23 June of an agreement under which the UK will assist in boosting Ukrainian naval capabilities.

British Minister for Defence Procurement, Jeremy Quin, and First Sea Lord, Adm Sir Tony Radakin, were joined by Ukraine’s Deputy Minister of Defence, Oleksandr Myroniuk and as an industry representative David Lockwood from Babcock on the Type 45 destroyer, where the Memorandum of Implementation (MoI) was signed.

Building on the agreement signed on HMS PRINCE of WALES last October, the two nations and their industrial partners will now push Ukrainian naval capabilities enhancement projects (UNCEP) forward. These projects will include: the introduction of new capabilities through delivery of new naval platforms and defensive shipborne armaments; the training of Ukrainian Navy personnel; the creation of new naval bases; and the purchase of two SANDOWN-class mine countermeasure vessels.

Babcock International will lead British and Ukrainian industrial partners to assist the Ukrainian Ministry of Defence in delivering these projects, with funding made available by UK Export Finance.

“Ukraine and the UK are good friends and allies. Today’s Memorandum gives a new impetus to our co-operation in naval industry and will facilitate further development of the Ukrainian Navy. We appreciate the British support and value your experience,” stated the Ukrainian MoD.

Contractual work will now begin to implement the following projects:

• Missile sale and integration on new and in-service Ukrainian Navy patrol and airborne platforms, including a training and engineering support package;

• The development and joint production of eight fast missile warships;

• The creation of a new naval base on the Black Sea as the primary fleet base for Ukraine and a new base on the Sea of Azov;

• Babcock will participate in the Ukrainian project to deliver a modern frigate capability;

• A government-to-government sale of two refurbished SANDOWN-class mine countermeasure vessels.

Our strengthened relationship with the UK Government has been instrumental in underpinning this significant agreement which is supported by UK Export finance and we continue to work with them on a number of international opportunities.

The UK and NATO are committed to Black Sea regional security, stability and prosperity, and to Ukraine’s territorial integrity and sovereignty, which is exemplified by HMS DEFENDER’s visit to the port of Odessa as part of the UK’s Carrier Strike Group deployment.

During the visit by Ministers, a trilateral exercise between the UK, Ukraine and the US took place on board the ship, showcasing British support to maritime capability development and interoperability. The UK enjoys a strong bilateral relationship with Ukraine, and is committed to securing its security. Since 2015, the UK has trained over 21,000 Ukrainian military personnel in medical skills, logistics, counter-IED, leadership, planning and infantry tactics as part of Operation Orbital and the UK-led Maritime Training Initiative. 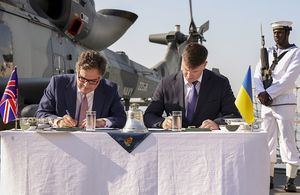