A new Joint Hawk Training Squadron has been stood up at RAF Leeming, to train pilots from both the Royal Air Force and the Qatari Emiri Air Force on the HAWK Mk167, which the RAF will operate under the designation HAWK T2.

“The new Joint Hawk Squadron not only delivers greater prosperity for British industry,” said British Defence Minister Ben Wallace, “it will also allow our armed forces to build stronger relationships and create opportunities for further engagement with our Gulf partners in the future.” Wallace was speaking during an event held at Leeming on 24 November to mark what the RAF’s website describes as the squadron’s “reformation“. Also present was Dr Khalid bin Mohamed Al Attiyah, Qatar’s Defence Minister, himself a former fast-jet pilot.

The new squadron is under the command of Wg Cdr Jamie Buckle, and deputy commander Maj Ali Hamad Al-Hajri, of the QEAF. The RAF website says the unit is designated 11 Squadron (Qatar), but photographs show a sign announcing it is 11 Squadron QEAF. This designation is also used on the name badges of Qatari squadron staff, while trainees’ name badges carry the name and insignia of IV (AC) Squadron, based at RAF Valley in Wales – commanded by Wg Cdr Buckle.

The first four QEAF student pilots began training at Leeming in October. The squadron will train eight Qatari pilots per year and RAF student pilots will join the squadron next year. The model for the joint enterprise has been provided by the UK-Qatar Joint TYPHOON Squadron, based at RAF Coningsby. This squadron is designed to train up to 20 QEAF pilots ahead of the expected delivery of TYPHOON to the Gulf nation in 2023. In July, BAE Systems announced it had been awarded a six-year contract to provide qualified flying instructors for both live and synthetic training for the joint squadron.

Qatar has ordered nine HAWK Mk167 – the latest variant of the venerable jet trainer, whose most famous users are the RAF’s aerobatic display team, the Red Arrows. The aircraft are built in the UK by BAE Systems. The HAWK order forms part of Qatar’s £6 billion (€7.12 billion) contract with the UK, signed in 2017, which also includes 24 TYPHOON fighters and associated training, and an availability support service. 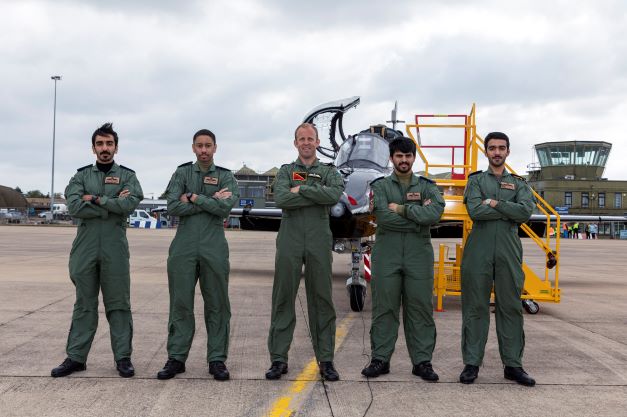