The leading underwater defence technology event came to fruition this year amid a political landscape that would have been difficult to predict, notes Rear Admiral Jon Pentreath, Senior Naval Advisor, Clarion Defence and Security. “Following years of land-locked conflicts, the maritime element is once again a core component of the threat environment,” the Admiral writes in his welcome note to UDT’22.

The long-awaited exhibition and conference is an excellent opportunity for manufacturers and service providers to showcase their expertise in the undersea defence and security sectors. Manufacturers from many countries, including Finland, France, Germany, Israel, Norway, Portugal, Spain and the United Kingdom, present a significant range of world-class products – and some of them are keen to establish enduring and mutually beneficial partnerships. UDT’22 is an ideal opportunity for companies to look at these opportunities.

This creates entirely new prospects for the user community too – with submarine commanders, operators of unmanned platforms and naval Special Operations Forces (SOF) benefiting from a plethora of new technology, to achieve underwater supremacy in the 2020s. UDT’22 makes clear that the current political and economic climate will place intense pressure on many nations to ensure that specialist defence assets – such as submarines, unmanned systems, sensors and weapons – represent true value for money. The introduction of manned and unmanned off-board vehicles into host submarines or surface warships, in particular, is becoming a real opportunity to distance operators and high-value assets from threats. As promoted by a range of international manufacturers at UDT’22, the use of unmanned underwater systems – Remotely Operated Vehicles (ROVs) and Autonomous Underwater Vehicles (AUVs) – grows as increased investments are made in maritime safety and security. As platforms, personnel and budgets have diminished over the years, users are using more modular and more robust systems to address the range of complex missions in the unpredictable maritime environment.

Saab, one of the industry elites showcasing their innovations at UDT’22, faces inherent challenges when providing highly reliable, flexible, modular systems for maritime security and mine countermeasures operations. The leading manufacturer of modular AUV/ROV systems at the global level, Saab is positioning its complete product range of AUV/ROV systems – DOUBLE EAGLE, SUBROV, AUV62-AT and the Multi-Shot Mine Neutralization System (MuMNS) – as a key asset for maritime customers requiring mission-adaptable solutions. Saab confirmed on the first day of UDT’22 that, seeking full-scale protection against sea mines, many navies draw on robotic technologies fitted to their Mine Countermeasures Vehicles (MCMVs). ROVs and other extended standoff ordnance detection methods remain high on the agenda when it comes to the introduction of successor classes in the 2020s – for example, in Belgium, France, the Netherlands and the United Kingdom.

As to the increasing significance of unmanned systems, a major influencer and traditional supplier to many navies is Atlas Elektronik, which expects future cooperation between AUVs and ROVs (tethered and autonomous) in MCM missions as an important way forward to increase stand-off distance between MCM units and the threat, ranging from sea mines to the growing number of waterborne explosives. An interesting mine disposal tool, effective against floating and drifting mines alike, is the company’s Cobra system. It can be fitted to the re-usable SeaFox AUV, offering an EOD capability from the surface to a depth of 300 metres.

Those with long memories will remember sea mines (and other underwater explosives) may be asynchronous weapons, since their action typically occurs long after they were emplaced. Laying mines at sea is a classic asymmetric ploy in that it is much safer, cheaper and quicker to place them than it is to detect and neutralise them. At the beginning of the 2020s, and with the advent of military conflicts between ‘peer’ states, mines provide very effective anti-access and area denial. Military powers with very limited maritime capabilities can use them successfully to deter and delay the world’s greatest, an industry source noted on the first day of the exhibition. But naval mines are the insidious threat to shipping of all types, to include surface ships and submarines, and amphibious ships attempting to close the beach and put troops ashore, as well as merchant shipping. The mere threat of mines in an area can trigger a massive and costly effort to find and avoid or neutralise that threat.

A new product on display at UDT’22 is the TURSO MM30 moored sea mine, a collaborative project undertaken by Finnish defence technology firms Forcit Defence and DA Defence & Aerospace (DA-Group). This influence sea mine features “the latest generation of the TURSO target detection system with multisensor technology, consisting of sensors for detection of acoustic, magnetic, pressure, inertial, UEP [underwater electric potential] and photonic signatures,” according to Forcit Defence. A company representative told MON that it works closely with DA-Group on technologies for underwater dominance, combining their decade-long expertise in the field of naval minelaying technology in particular. In September 2021 Forcit Defence, internationally known as an inventor of insensitive munitions (IM) technology, was contracted by the Estonian Centre of Defence Investment to deliver BLOCKER influence sea mines to the Estonian Defence Forces. Developed and produced in concert with DA-Group, BLOCKER contains fully IM-compliant explosives equivalent to over 1,000kg of TNT, offering the Estonian customer a cost-effective underwater weapon with long shelf life and minimal maintenance requirements during its expected service life. 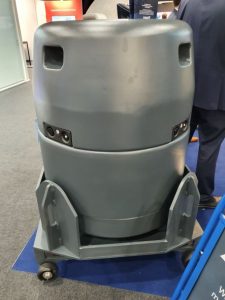 The TURSO MM30 moored influence sea mine is designed for an operational depth of 10-200 metres. 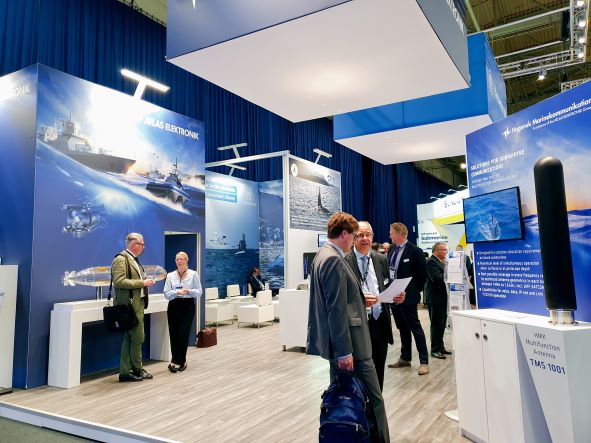 UDT’22 is back as a ‘live’ event following three years of absence, representing the three key elements of the underwater community – users, industry and academia. (All photos: Stefan Nitschke)