The Colombian National Police has purchased two ATR 43-300 transport aircraft to be operated by the Police Aviation unit (ARAVI) of the Anti-Narcotics Directorate.

The planes were purchased under the ‘Strengthening Air Missions’ investment project, which aims to invest $53.3 million in strengthening the force’s aviation. Of this, $16.5 million will be spent on the aircraft, purchased second-hand and to be added to five aircraft of the same model already in operation, conducting logistical support and personnel transport missions.

The contract was awarded to the Consorcio Aeronaves PNC consortium, consisting of Río Sur, Construcción Empresa and Proyecciones para el Desarrollo and Ingeambicol.

The same investment project also aims to buy three Embraer ERJ series (135, 140 or 145, no decision yet made) for transport of authorities and detainees, and a Cessna 208 Grand Caravan, which will be added to the fleet of two Caravans and three Grand Caravans already operational. The objective is “to increase operational capacity, strengthen and update the air transport component, as well as guarantee coverage in the national territory of the police service in all modalities and specialties“.

The project’s executive summary also states “In addition, it is intended to guarantee the opportunity of immediacy of the police service throughout the national territory, progressively reduce the number of lines (aircraft models), with a gradual dismantling of those that generate high costs in the aviation component without affecting the installed capacity of the institution and its level of response before possible events of the national order, and increase maintenance and technical support capacity by improving the supply chain in parallel“. 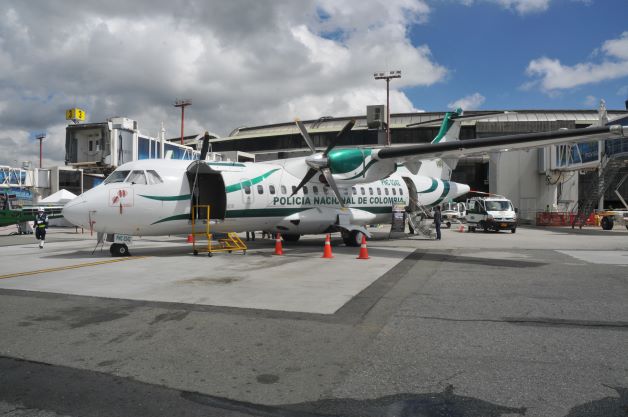 An ATR 42 already in service with the Colombian Police. (Santiago Rivas)