This abridged article (for full article, please see MT #01-2019, available at SHOT Show 2019 in dedicated bins or for order here) looks at how Turkey has always attached the utmost importance to the deterrent capability of its armed forces and has therefore traditionally made modest efforts to become self-sufficient in what might be called basic defence industrial activities, i.e. small arms, ammunition and explosives manufacturing.

Turkey has traditionally looked to domestic suppliers to meet the small arms requirements of the armed forces and security forces, enabling the sector to develop a comprehensive range of products. Until the 1990s, the backbone of the small arms sector was formed by state monopoly MKEK, for many years the sole source of arms and ammunition in Turkey from 7.65-203 millimetres. During the early 1990s private sector companies were given the right to manufacture handguns for the first time in Turkish history: even foreign investment was catered for – in 2002 Beretta acquired Vursan, now called Stoeger Silah Sanayi AS, the first Turkish company manufacturing semi-automatic shotguns and having obtained a pistol manufacturing license from MoND in 2005.

Today, in addition to MKEK, private sector companies such as Sarsilmaz Silah Sanayi AS (Sarsilmaz Firearms Inc.), Samsun Yurt Savunma (SYS, also known as CANIK), KaleKalip, Girsan and TISAS are also very active in both the domestic and export markets. According to the TOBB database there are 30 registered handgun manufacturer companies with 3,620 employees and 133 hunting rifle manufacturers with 4,681 employees in Turkey.

With a broad range of over 1,000 defence products, MKEK not only services Turkish requirements but also exports to more than 40 countries, including the US. The organisation realized U$92 million in exports in 2015, $118 million in 2016 and $51 million in 2017, with an expected 2018 achievement of $228 million. MKEK exports its small arms and ammunitions to the US via its partnership with Zenith Firearms and its parent companies Zenith Quest International (ZQI) Ammunition and Zenith Quest Corporation (ZQC). Thanks to its cooperation with Zenith since 2013 MKEK (as a manufacturing partner) has exported more than $100 million worth of products to the American market, including pistols, MP5 sub-machine guns and 5.56x45mm, 7.62x51mm and 9x19mm Parabellum ammunition.

There are dozens of gun manufacturers in Turkey, but Sarsilmaz is by far the largest and, with a 138-year history, stands as the oldest. Sarsilmaz, the first private Turkish company given the right to manufacture a rifled barrel (7.62mm), received the necessary production license from the MoND in 2012 to manufacture 9mm light submachine guns and 5.56mm rifle in 2012: the company displayed its first resulting products during IDEF 2013.

Sarsilmaz exports its products to 78 countries, with 50% of these sales in the US under the brand name SAR ARMS. More than 50,000 guns are exported annually to the USA. Law enforcement authorities in 21 countries use Sarsilmaz pistols, with Pakistan, Thailand, Senegal, Colombia, Bahrain, Bangladesh, Lebanon, Ghana and Macedonia are among nations that favour Sarsilmaz products.

Sarsilmaz has been selected by the Turkish procurement authority SSB under the Indigenous Local Handgun Development (ÖYTG) Project and has an order for a total of 110,242 9mm SAR 9 METE pistols to Turkish military and police forces. It has also won a National Police tender for an additional 40,000 SAR 9 pistols. Sarsilmaz also manufactures the 5.56mm SAR 223T infantry rifle for domestic customers.

KaleKalip has also played an active role in the MPT-76 National Infantry Rifle Project. MKEK received support from KaleKalip, which co-designed the weapon and was assigned as subcontractor during the prototype development and production phase. On 15 December the SSB awarded an $18 million contract to KaleKalip for the series production of 15,014 MPT-76s. Around 2,000 had been delivered by November 2018. SSB disclosed in January 2016 that the rifle had a unit price of $1,458.

Samsun Yurt Savunma (SYS, CANIK) started manufacturing firearms within the scope of the Eastern Black Sea Weapon Project in 1998 and now exports 16 models of semi-automatic pistols of two main design series (TP Series with 10 models and Hammer Fire Series with six models) in 9mm, .380ACP and .40S&W calibres, under the CANIK brand, to 18 countries in four continents. SYS is located in Samsun, where it has a 15,000m2 facility with 260 employees.

On 18 June 2018, SYS completed delivery of the first batch of TP9SF METE-S pistols to the Turkish Naval Forces (which will procure a total of 8,700) under the Indigenous Local Handgun Development (ÖYTG) Project. The company developed two different models within the Project: the Type-A (TP9SF METE-S) and Type-B (TP9SF METE). The TP9SF METE-S, which is equipped with a safety catch, is being offered to the TAF, while the TP9SF METE, which lacks a safety catch, is destined for the National Police, which will procure a total of 29,700 pieces in three batches of 10,000, 10,000 and 9,700. Both models feature a striker mechanism and a single action trigger, and are delivered with three magazines each, one 15-round and two 18-round capacity.

In 2017, to meet the Philippine National Police 9mm Striker-Fired Pistol Lot 2 requirement, SYS offered the CANIK TP9SF Elite-S pistol in cooperation with local partner Nashe Enterprise. The joint venture won the tender, in the amount of approx. $4.6 million, and secured a contract in February 2018 for the delivery of 10,000 pistols. These were delivered by July, bringing the total number of the weapons in Philippine service to 11,920. Other firearms delivered to the Philippine National Police include: 8,170 5.56mm Galil ACE 22N rifles; 4,933 5.56mm EMTAN rifles; 1,920 MASADA striker-fired 9mm pistols; 231 NEGEV 7.62mm light machine guns in 7.62mm (with an additional 320 in 5.56mm) under the Capability Enhancement Programme. 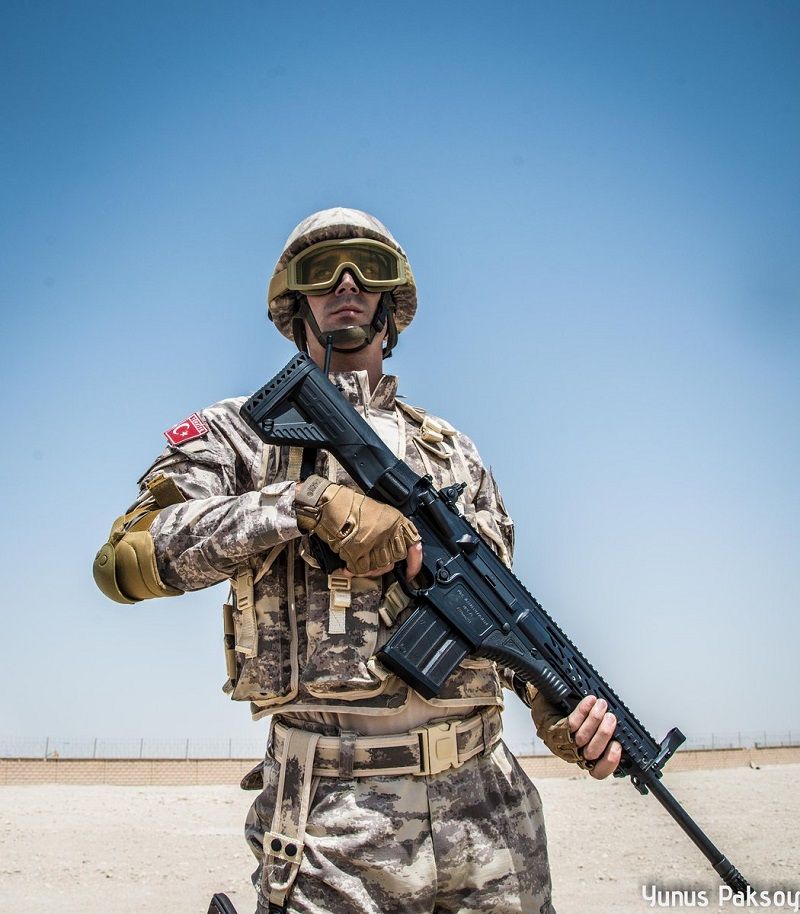