The aerospace sector is the largest contributor to Turkish defence exports. Military aerospace exports in 2017 totalled U$393 million, compared with $542 million in the civil sector – a reflection of the expansion of overall trade with the EU and NAFTA. Turkey mainly exports aircraft parts such as A400M and F-35 LIGHTNING II components to EU countries and the US under industrial participation and/or offset commitments.

The backbone of the Turkish aerospace sector is formed by state-owned Turkish Armed Forces Foundation (TAFF) companies Turkish Aerospace (TAI) and Tusas Engine Industries (TEI), which also contribute the lion’s share of turnover and export figures. According to official figures, TAI achieved $1.43 billion in revenues in 2017 (a 13.5% increase over 206) and $829 million in exports – 58% of turnover. TEI, on the other hand, realised $320 million in revenues (20% from the sales of military aircraft engine parts) of which $268 million came from exports: at the end of 2017 its order backlog stood at $4.6 billion. However, opportunities are also emerging for private companies such as Alp Aviation (a joint venture between Sikorsky Aircraft and Turkey’s Alpata Group), BNA (BAE Systems-Nurol Air Systems Inc.), Fokker Elmo, KaleKalip/Kale Aero, Kale Pratt & Whitney Engine Industries, Baykar Makina and Vestel Defence Industry.

In order to meet Turkish Air Force (TurAF) requirements beyond the 2030s, the TF-X National Combat Aircraft (MMU – Milli Muharip Uçak) Development Programme was launched in accordance with a Defence Industry Executive Committee (DIEC) decision dated 15 December 2010. MMU/TF-X was planned to replace the F-16C/D from 2030 and TAI was selected as the prime contractor.

As of June 2018, the Engineering Development & Preliminary Design Phase is continuing, with completion planned for 2021. This four-year phase is expected to cost around $1.3 billion, of which $3-400 million will be allocated to infrastructure investment and about $1 billion for the engineers, according to TAI President & CEO Temel Kotil. It will be followed by eight-year Critical Design Review (CDR) and Prototype Production and Qualification Phases, which are planned to cost around $7.3 Billion. The total anticipate expense by the time of the aircraft’s maiden flight is currently put at $8.2 billion: This figure will rise to $8.6 billion when the seven flying prototypes are taken into account and Mr Kotil estimates the programme as a whole will cost about $20 billion.

Replacing the F-16C/D in TurAF service in the early 2030s, TF-X will be a fifth-generation indigenous air superiority fighter with secondary ground attack capability, which will escort and provide air protection to TurAF’s F-35A LIGHNING II fleet. The service currently operates 238 F-16C/Ds and Turkey is likely to procure some 150 TF-X in the long term as replacements.

In December 2017, TAI indicated the aircraft’s technical characteristics: a length of 19m, wingspan 12m, around 60m2 wing area and over 27,215kg in maximum take-off weight. Powered by a pair of 20,000lbs-class turbofan engines, the TF-X is intended to have a maximum speed of Mach 2, a service ceiling of over 55,000ft and a combat radius of over 600 nautical miles.

Mr Kotil indicated that when it enters TurAF service, TF-X will have indigenous turbofans each generating 27,000lbs thrust. The first TF-X prototype was originally expected to achieve its maiden flight in 2023, when Turkey will celebrate the 100th anniversary of the founding of the Republic, but this schedule was revised in March 2018 when Mr Kotil disclosed that the first flight will be achieved in 2026 with engines to be procured from abroad: either the EuroJet EJ200, General Electric’s F414-GE-400 or Russian United Engine Corporation’s SATURN AL-31. In June 2018, the first flight date was revised once more, to 2027. The first of an envisioned 150 production TF-X aircraft is expected to leave TAI facilities in 2029 and to enter service in 2031. Deliveries will continue until 2039 and, on current plans, TF-X aircraft will be phased out of TurAF’s inventory from the 2070s.

On 22 July the government announced signature of the HürJet Project Protocol by TAI, the Undersecretariat for the Defence Industries (SSM) and TurAF command on 2 July. The programme has been developed considering the needs of both Turkish and global markets, and will receive strong support from both SSB and the TurAF.

A total of five HürJet prototypes will be manufactured in two different configurations: The Advanced Jet Trainer (AJT) and the Light Combat Aircraft (LCA). The latter variant will be integrated with a fire control radar, an external payload of up to 2,721kg on six external hardpoints, a fire control system and various mission systems. The HürJet AJT prototype is expected to conduct its maiden flight in 2022 and to enter TurAF service in 2025.

The HürJet is a single-engine, twin-seat advanced jet trainer and light attack aircraft, currently under development by TAI and probably with technical support from Sierra Nevada Corporation, which was, at one point, a player in the USAF’s T-X advanced jet trainer competition. It is intended to replace the ageing T-38M AJTs currently in service with the TurAF. The HürJet prototypes will be powered by GE’s 17,000lbs thrust-class F404-GE-102 turbofan engine, while a number of series production aircraft are expected to be powered by F404 turbofans to be manufactured under license in Turkey. There is a plan, however, to start deploying indigenous turbofan engines on HürJet production models some time in the 2030s.

As a clean-sheet design, the HürJet will be Turkey’s first indigenous supersonic aircraft and one of the world’s few supersonic trainers. Some 13m in length, 4.2m in height, with a 9.8m wingspan and 24m2 wing area, estimates of the predicted dry and maximum take-off weights have not yet been released. The aircraft’s maximum speed will be Mach 1.2, and the maximum altitude 45,000 feet. The HürJet will have a climb rate of 25,000ft/min, will be able to manoeuvre at +8G/-3G and be capable of sustaining 6.5G at 15,000ft altitude. The range of the aircraft is 2,592 kilometres.

A contract for development of the Turkish Primary and Basic Trainer Aircraft (HÜRKUS) was signed by SSB and prime contractor TAI on 15 March 2006. It included provision for the manufacture of two prototypes and two structural test aircraft.

Fitted with an analogue cockpit, the HÜRKUS-A aircraft performed its first flight on 29 August 2013. Type certification by EASA and the Turkish Directorate General of Civil Aviation (SHGM) was completed in July 2016, following the completion of over 500 flight tests in the prototypes.

Under a series production contract valued at $250 million, awarded in December 2013, TAI is manufacturing 15 HÜRKUS-B Basic Trainers (plus 40 options) to meet TurAF’s demand for a new-generation basic trainer. As an advanced version of HÜRKUS-A, HÜRKUS -B will feature a digital cockpit and modern integrated avionics. The first HÜRKUS-B conducted its maiden flight on 19 January. Deliveries to TurAF was originally planned for June 2018, but has been postponed till the autumn in order to make some further modifications to meet last-minute TurAF minute requirements. Deliveries will be completed in June 2019.

TAI displayed the HÜRKUS-C New Generation Light Attack & Armed Reconnaissance Aircraft prototype in January 2017, conducted a first flight test in March and a first live firing test – with Roketsan’s Laser UMTAS anti-tank missile – on 7 April. The HÜRKUS-C prototype was delivered to Gendarmerie General Command (GGC) during the second half of 2017 under a leasing agreement. GGC has launched a project to procure up to 12 [6+6] HÜRKUS -C aircraft. In addition, SSB and TAI signed a development and serial production contract during IDEF in May 2017 covering the delivery of 12 (+12 optional) HÜRKUS-Cs to Turkish Land Forces Command. Deliveries are scheduled to start in 2018.

The HÜRKUS-C will be integrated with an EO/IR targeting/imaging system on the centreline pylon (the prototype aircraft has FLIR’s Star SAFIRE 380-HLD FLIR turret) and can carry up to a payload of 1.5t (including Roketsan’s Laser-UMTAS missiles, 12.7mm and/or 20mm gun pods, CIRIT laser-guided missiles, GBU-12, KGK-82, HGK-3 and TEBER-82/82 precision guided bombs, Mk81 and Mk82 general purpose bombs, Mk106 and BDU33 training bombs) on six underwing hardpoints. The HÜRKUS-C will also be equipped with a night vision-compatible fully digital cockpit, a tactical datalink system, secure communications, a self-protection system and an armour-reinforced airframe.

The ÖZGÜR Programme was launched by a DIEC decree on 15 December 2010, in line with TurAF requirements, and covers the modernisation and certification of an F-16C Block 30 aircraft (which did not receive the Peace Onyx III avionics upgrade) with a national avionic suite solution that combines an indigenous mission computer with a national operational flight programme and an optional AESA radar. The 6 March 2012 contract signed by SSB and TAI became effective on 24 May that year: Aselsan is the main subcontractor for the ÖZGÜR programme.

Under the $46 million contract, TAI’s original intent was to conduct a first test flight with the indigenous avionics solution within three years and to commence a 52-month delivery programme in the fourth year. All 35 Block 30 aircraft in TurAF service where therefore expected to be completed by 2020, but the programme is currently lagging behind this schedule.

Meanwhile, TAI and Aselsan signed a $17 million contract on 6 March 2012 for development of a mission computer and procurement of the related avionics, with a 46-month schedule. A System Requirements Review Meeting was held on 4 December 2012 with the participation SSB and the TurAF, and the Preliminary Design Review (PDR) phase was completed in 2013.

The prototype F-16C Block 30 aircraft modernised under the ÖZGÜR Programme and equipped with three coloured multi-functional displays and an indigenous mission computer running an Aselsan-developed national operational flight programme had conducted nine test flights as of 27 December 2016. The software running on the mission computer is installed in blocks dealing with different task capabilities (air-to-air, air-to-surface, etc.), which means not all mission computer functions are yet available. The existing flight control computer has not been changed and is therefore being used as part of the current project on an ‘as is’ basis.

In December 2016 (month 54), the 52-month programme schedule was extended to 80 months. After an extended period of silence, a prototype F-16C Block 30 modified under the ÖZGÜR programme conducted a test flight over Ankara on 23 July 2018. Sources have indicated to MONCh that important achievements have been made in the programme during the last two years and that steps are currently being taken to initiate the serial modernisation phase of the programme. 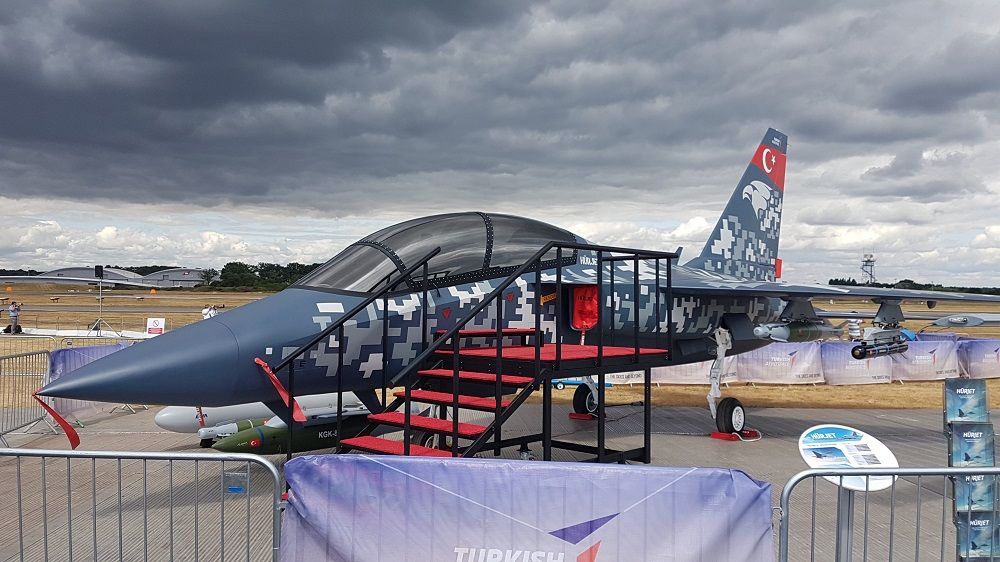