The Presidency of Defense Industries (SSB), Turkey’s defence procurement agency, has revealed that two indigenous aircraft engine manufacturers have responded to the request for proposals it issued in June for development of a turbofan engine to power Turkey’s next fighter aircraft – the TF-X – and that a third is preparing a response.

Tusas Engine Industries (TEI) and TRMotor have both submitted responses to the RfP, while TAEC – a joint venture between Rolls-Royce and Turkish conglomerate Kale Group (49/51% ownership respectively) will provide a response soon, according to an SSB media briefing. MON understands the TAEC proposal will be for an engine that will power the TF-X to speeds of Mach 1.8 and an altitude of 40,000 feet.

Ismail Demir, SSB’s head, outlined the government’s fundamental requirements: that the engine be produced in Turkey, free of any export license restrictions, that IP will rest with Turkey – and that it be a cost-effective solution. The second of these requirements may prove to be a problem with the TAEC bid, he revealed – suggesting that if that were the case, Turkey would move ahead with an entirely indigenous programme.

Founded in 1985, TEI is a state-controlled enterprise. TRMotor, established in 2017, is a wholly-owned subsidiary of Tusas, parent company of TEI. TF-X prototypes will be built around the General Electric F110 turbofan, built under license by TEI. There have been suggestions that this engine could be considered for series production of TF-X, but that would seem to run counter to the requirement the selected powerplant be free of export restrictions.

TF-X is scheduled to conduct its maiden flight in 2026 and to enter Turkish service in 2029, according to official information. 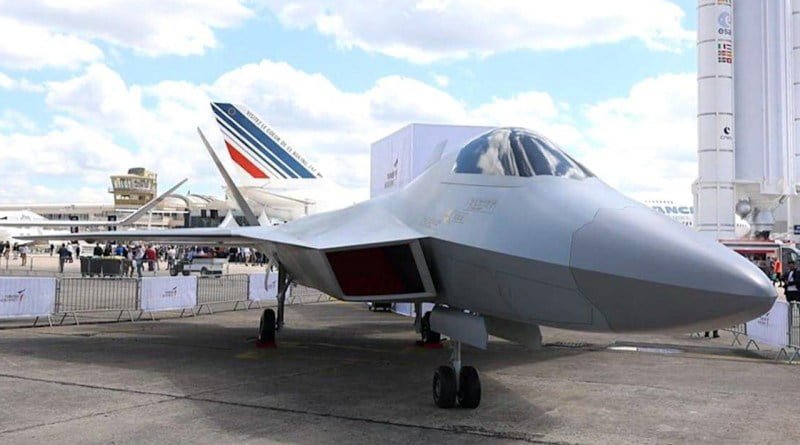 A TF-X mock-up was revealed to the public at the Paris Airshow in 2019. (Wikipedia)