Food that fuels soldiers in the field plays more than just a supporting role, it is life saving and essential.

MONCh Gear Box had the opportunity to review the vegetarian/vegan Trek‘n Eat instant outdoor/expedition meals from Katadyn (that some outdoor afficionados might know for their expertise in producing top notch water filters, tests coming soom) on our latest testing trip through the rough backwoods of Southern Ireland. We tested the Chana Masala (indian chick pea with rice) and the Vegetable Jambalaya, which are part of the Katadyn vegetarian-/vegan-friendly meals, with Trek‘n Eat“ also offering a variety of meat options for dinner and breakfast.

The bags can be neatly folded so they don‘t take away a lot of much needed space in your backpack while on an operation, and they are round, which allows you to stir the food properly after putting hot water in them.

For expedition purposes the meals are packed under a protective atmosphere. So you see, Trek‘n Eat meals are a well thought out high end product for both casual trekking and for serious tactical units as well.

The Trek‘n Eat preparation is printed on the bags, too, and is as easy as it gets: boil the correct amount of water, put water in bag, stir, wait, eat.

The exact amount of water is printed on the bags, but if you do not have anything to measure it with (like boiling the water in a steel cup) there‘s a centimeter scale printed on one side of the bag up to which the water should reach for the best result.

The Jambalaya is a creole meal (180g of freeze-dried rice, vegetables, and spices at 348kcal/100g) and looks and smells tomato-ish when opened. You can actually see the freeze-dried rice, peas and corn. Put the water in it, stir, reseal bag, wait for two (!!) minutes and dinner‘s ready.

The Jambalaya looks and smells tasty even in the plastic bag and it doesn‘t disappoint. Don‘t get me wrong: it‘s not as delicious as a self cooked dinner at home, but it definitely beats any instant meal I‘ve had so far. It doesn‘t have the typical instant meal taste at all, you can taste the different spices and ingredients and the mouthfeel isn‘t as mushy as I thought it would be.

If you can‘t or don‘t want to finish it all at once, the resealable bag comes in handy. I don‘t know how proof the bags are if sealed again, but they look so reliable I wouldn‘t have a problem putting one with a prepared meal in my back pack.

The Vegetable Jambalaya gets a 8,5 out of 10 from me. It‘s tasty, it‘s ready in no time. Well done, Katadyn!

The Chana Masala is an indian meal (180 g freeze-dried, rice, chick peas, spices, at 339 kcal/100g) and the first thing you notice, when you open it, is a „real“ smell of indian food: Curry-ish, with a hint of tumeric und cumin. Looks and smells nice, even raw in the bag.

So pour correct amount of water on freeze-dried food, wait for 10 minutes…the Chana Masala needs 10 minutes instead of the two it takes for the Jambalaya to be ready! We had pleasant 15 degrees centigrade when we prepared the meal and it wasn‘t as hot as you would want a meal to be after a whole day on the mountains. I imagine, that if you prepared the Masala in sub-zero temperatures and waited ten minutes it would be nothing but lukewarm. I would recommend the Masala more for mild climates, if you still want to have a hot meal.

And even after ten minutes some of the chick peas were still pretty crispy. To say the least. What didn‘t work for me as well (but that‘s not something I can blame the meal for, just my personal taste) is the sweetish taste of raisins. If you like it, you will be ok with the Masala. All in all, the Masala gets a 5,5 out of ten from me. It‘s nutritious, no doubt, and tasty if you like a sweet hint in a dinner, but the pretty long time it takes and the fact, that after the long time, some of the ingredients are still not done, doesn‘t even make it a close second to the Jambalaya.

We had both meals after really long marches and shared them with a small pot of couscous and were fine. I suppose if you ate one alone, you would be satisfied afterwards.

The one problem I have with the Trek‘n Eat meals (or with any other instant outdoor meal, for that matter) is the thick plastic bag they come in. Other than that, MONCh Gear Box approved. 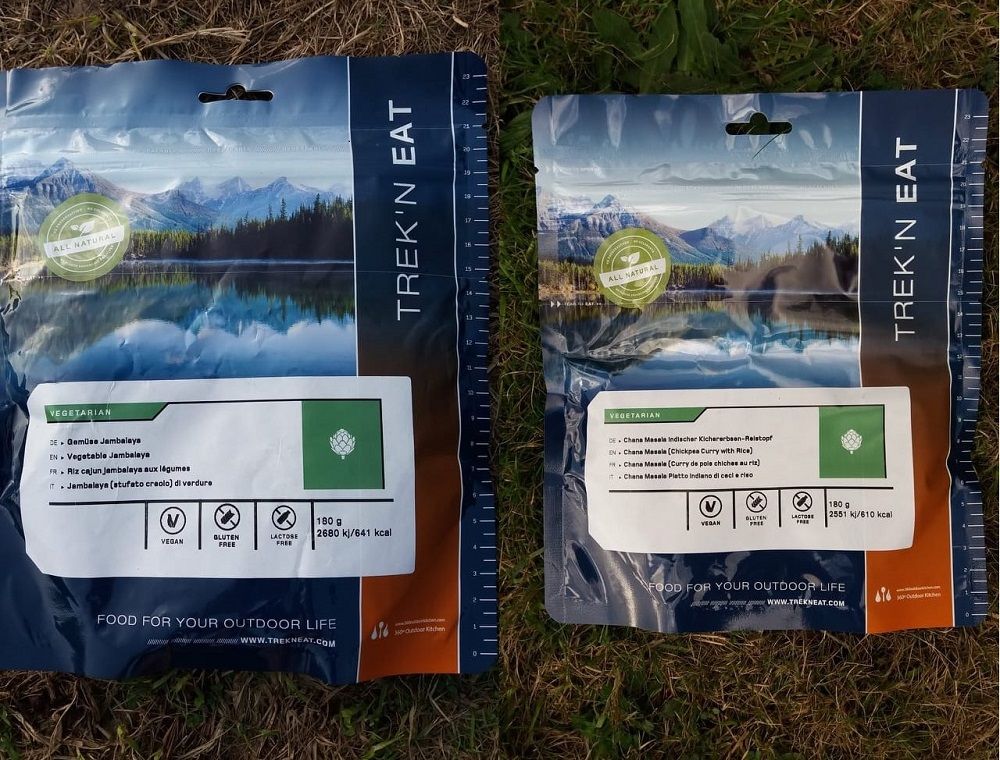