Turkey and the Stealth Plane

Turkey’s participation in the F-35 Joint Strike Fighter (JSF) programme dates from 1999, when it invested U$6.2 million in the Concept Demonstration Phase (CDP) as a Level IV partner through the Foreign Military Sales (FMS) system. The nation then became a Level III partner, committing $175 million to the System Development & Demonstration (SDD) phase in July 2002, spread over 11 fiscal years. In addition, the Turkish government has made $75 million in credit available to Turkish companies to update their production infrastructure for the JSF programme. In 2007 Turkey pledged $700 million to the Production, Sustainment and Follow-on Development (PSFD) phase, making a further $250 million available to support participating industry. The agreement stipulates that, as a Level III partner, Turkey’s maximum contribution to shared costs in the PSFD phase were not to exceed $690 million.

Turkey has therefore committed around $1.2 billion to the programme since 1999 and, according to figures made public by Defence Minister Nurettin Cankli in June this year, expects to pay around $11 billion for the initial quantity of 100 F-35As – although at the same time he stated Turkey has paid out some $800 million under the programme. In July, US Secretary of Defense Jim Mattis stated to Congress that Turkey has invested $1.25 billion in the F-35 development phase – though it is unclear whether or not this includes costs associated with the National Integrated Training Centre (ITC) and European Regional F135 Engine Maintenance Repair Overhaul & Upgrade (MRO&U).

In May 2013, by which point Turkey had not placed any order for aircraft, a Lockheed Martin official disclosed that total value of contracts let to Turkish industry under the programme amounted to $300 million. By April 2016, the Turkish government had calculated total estimated programme revenues to Turkey at $7.5 billion, whereas Lockheed Martin calculates F-35 Production Industrial Participation opportunities for Turkey (in total for Lockheed Martin and Pratt & Whitney) at over $12 billion by programme end, which is foreseen for 2051. In June this year Turkish officials stated that the national industry has so far realised $700 million in F-35-related exports.

The issue of Turkey’s self-sufficiency in sustaining its planned F-35A fleet has been a matter of intensive discussion at government-to-government level and with the manufacturers for several years, with the result that Turkey has been given approval to build/assemble its own F135 engines and was also selected to have the first European Regional F135 Engine depot overhaul capability. Additionally, Turkish Aerospace represents the nation’s armed forces within the Autonomic Logistic Global Sustainment (ALGS) system and Havelsan is the Turkish integrator for the ITC. In January, the government also launched a project to enable TurAF F-35As to connect with the Turkish Air Force Information System (HvBS), ensuring that HvBS and F-35s will securely exchange information. SSB received four proposals from Altay Yazılım, Aydın Yazılım, Havelsan and MilSoft Yazılım.

The TurAF F-35As will be integrated with indigenous weapon systems such as the Precision Guidance Kit (HGK), SOM Air Launched Cruise Missile and SOM-J air launched anti-ship missile. HGK and SOM-J integration efforts will be launched in 2021 with Block 4.2 software. There are concerns, however, that only two SOM-J can be carried internally and that if carried on the underwing pylons they will eliminate much of the aircraft’s stealthy nature. Integration activities, due for completion in 2023, are being conducted by Lockheed Martin Missiles & Fire Control in collaboration with Roketsan and TüBiTAK-SAGE.

The F-35A is crucial to the continued modernisation of TurAF and Turkey’s security strategy. The F-aircraft is a lot more than simply an F-4E 2020 and F-16C/D replacement: it will add a wide range of capabilities and will be a completely new weapons system for TurAF.

As of 22 June, Turkey has placed orders for 30 F-35As, which are scheduled for delivery by the end of 2023. Four aircraft will remain in the US till the end of 2020 (at Luke AFB) for aircrew and maintenance crew training. The balance will be progressively delivered to Turkey from 2019, where they will equip the 171st and 172nd Squadrons of the 7th Main Jet Base Command at Akçadağ, Malatya. 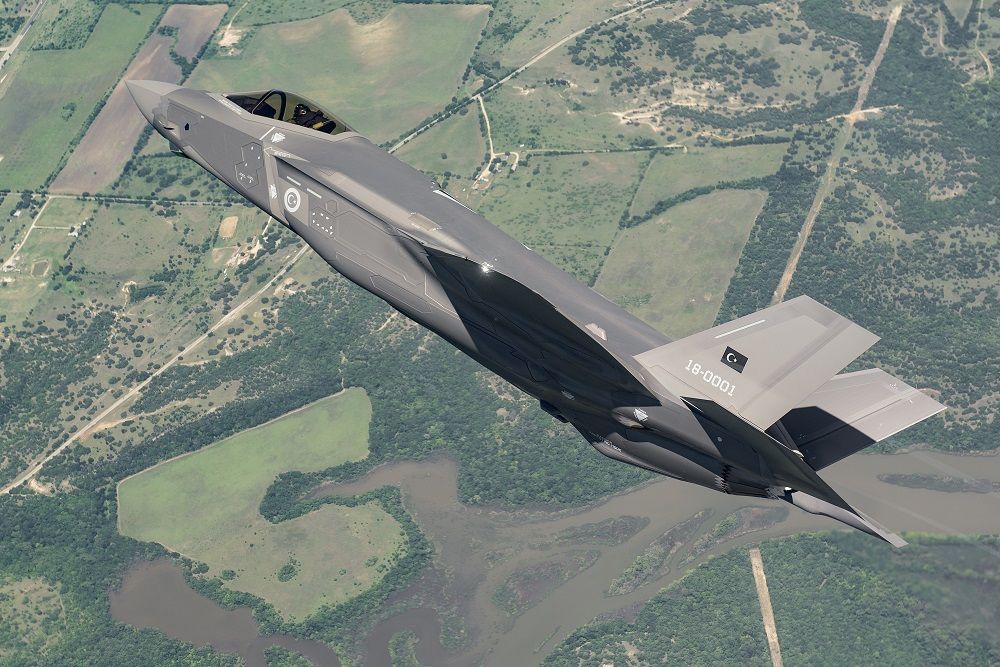