The Turkish Role in the Eastern Mediterranean

Turkish Naval Forces in the Spotlight

The discovery of rich oil and natural gas reserves in the Eastern Mediterranean, once seen as a catalyst for peace, stability and cooperation in the region, has in time turned into a source of tension and conflict. The reality is that greater resources mean more disputes.

Rising tensions in the Eastern Mediterranean could have a destabilising effect on the region. Disputes about the demarcation of Exclusive Economic Zones (EEZs) and exploration rights of offshore natural gas fields are causing tensions to rise dangerously between the Turkish Republic of Northern Cyprus (TRNC), the Republic of Cyprus (Cyprus hereinafter to distinguish from TRNC), Turkey, Greece, Egypt, Israel and Lebanon. The overriding international concern is that war could erupt if a solution is not found.

The Tamar, Leviathan, Zohr and Calypso gas fields were discovered between 2009 and 2018. Israel, Cyprus and Egypt are exploring new ways in which to exploit these fields, largely ignoring the claims or declared rights or Turkey, TRNC and Lebanon.

As the extent of the finds became clearer, a new axis between the former nations emerged to confront Turkey. In addition to agreements on the exploitation of the deposits, Greece and Cyprus have also signed agreements with Israel and Egypt to cooperate in the defence field to protect their new wealth against potential threats. The four nations are slowly but steadily enhancing their strategic cooperation and strengthening ties with regular multilateral military exercises. Israel wants to improve military relations with Greece in order to counterbalance the expansion of Turkey’s regional influence.

In January 2012, Cyprus and Israel signed two important military agreements; one allowing the Israeli Air Force (IAF) to use the airspace and territorial waters around the island to safeguard and protect crucial energy resources; the other allowing exchange of classified information.

It would be absurd to believe that Turkey would remain silent and immobile while Egypt, Israel, Cyprus and Greece conduct exploration and drilling activities in and around the island of Cyprus, drawing reserves from the Turkish and TRNC EEZs. Soon after the Eastern Mediterranean gas scramble began, Turkey engaged in gunboat diplomacy in defence of its interests.

Turkey is one of four regional countries with strong navies, the others being Egypt, Greece and Israel. Nations such as Libya, Syria and Cyprus have small navies, consisting of a few patrol boats or obsolete naval vessels: TRNC has only coast guard forces.

In 2015, in order to assure coordination and cooperation among those three Task Group Commands, War Fleet Command (which covers frigates, corvettes and fast patrol boats) was established and subordinated to Fleet Command. Fleet Command, which constitutes the striking power of Turkish Naval Forces (TNF), is now the largest naval component and consists of War Fleet Command, Submarine Fleet Command, Mine Fleet Command and Naval Aviation Command, which last celebrated its 104th anniversary in June this year. Although considerably reduced following the bloody coup attempt in 2016, today Turkey still boasts one of the largest naval forces in the world. Prior to the coup there was a total of 54 admirals in TNFC: as of August 2018 the service will still have 50 serving admirals – but their positions and roles have been considerably rationalised.

With some 87% of Turkey’s foreign trade being conducted by sea, ensuring the security of neighbouring seas and sea lines of communications and protecting Turkish sovereignty and maritime interests is of vital importance for Turkey – hence it is a primary objective of TNF.

Disputes over maritime jurisdiction areas (EEZs) and to maintain a powerful presence to protect against potential risks and deter any fait accompli being attempted over the Continental Shelf issue, TNF’s main area of focus has been shifted from the Aegean to the Eastern Mediterranean, where it operates sometimes in conjunction with NATO forces and sometimes as a purely national asset.

Since early 2000, Turkey has been investing heavily in its own defence sector capabilities. In the field of naval platforms, the main aim is to be able to design and conduct systems integration of all types of surface and sub-surface naval vessels in local shipyards – in both the military and private sector – using indigenous capabilities. Thanks to the contribution of Turkish companies such as Aselsan, Havelsan, Yaltes, Ayesa?, MilSoft, Meteksan Savunma, TüBiTAK SAGE, Roketsan, MKEK, KBST and STM, which complement the growing capabilities of the Turkish naval shipbuilding industry, TNFC is developing into a remarkably powerful and increasingly self-sufficient force. Strong investment in indigenous capability and successful cooperation between TNF and industry has led to local content reaching the 70% level in some projects by 2017.

According to the Turkish Ministry of National Defence (MoND) General Directorate of Shipyards (TGM), during 2017-2034 a total of 88 naval vessels, including submarines, will be constructed in Turkey to meet TNF and Coast Guard requirements.

TNF is one of the largest (next to Egypt) and most modern (alongside Israel) navies in the region. Its current surface vessel strength consists of 16 frigates (plus four I-class under construction), eight corvettes (plus two ADA-class to be commissioned in 2018-20190 and 19 HARPOON-armed fast patrol boats (FPBs), with a tender out for a further 10 to be produced locally. There are 12 submarines in service, with a further six REIS-class Type 214TN under construction at Golcuk Naval Shipyard. Naval aviation assets comprise 35 naval helicopters (24 S-70B SEAHAWKs and 11 AB212s for anti-submarine and anti-surface warfare (ASW/ASuW), two C-72 (ATR72/600) utility aircraft, six P-235 (CN235-100M) maritime patrol aircraft (MPA), with a further six ATR72/600 MPA to enter service in 2019-2020 under the MELTEM-III programme, according to TNFC’s official website, and one ANKA Block-B medium-altitude long-endurance (MALE) UAV system of three aircraft, equipped with CMX-15D forward-looking infrared (FLIR) and Aselsan’s SARPER synthetic aperture radar (SAR).

In all, as of July 2018 TNF numbers around 145 vessels of various sizes, with a total displacement of around 200,000t, including 16 patrol boats, 11 mine warfare vessels, 31 auxiliaries and 26 landing craft. A total of around 55,000 personnel includes the Amphibious Naval Infantry Brigade, naval special operations units of some 300 men, and three rescue teams. TNF has two naval special operations units — the Su Alti Savunma (SAS), which translates as ‘Underwater Defence,’ and the Su Alt? Taarruz (SAT), which translates as ‘Underwater Attack.’ To some extent, the SAT can be compared with the US Navy (USN) SEALs, while the SAS can be compared with the former USN Underwater Demolition Teams (UDT). Exact numbers are not in the public domain, but prior to July 2016 TNF’s special operations units comprised 12 SAT teams (each with up to 16 personnel) and 15 SAS teams. As a vital foreign policy tool, with the capability to reach all areas in which Turkey has interests and activities, the TNF is today capable of conducting both brown- and blue-water operations.

Egypt has the most numerous naval forces, but most of the surface vessels and Type 033 ROMEO-class submarines are not serviceable.

As a two-sea force, with a Northern Fleet Command (HQ at Alexandria, responsible for the Eastern Mediterranean) and Southern Fleet Command (HQ at Safaga, responsible for the Gulf of Suez and the Red Sea), Egypt has the largest regional navy in terms of the number of vessels. Even though the government has authorised procurement of new vessels over the last six years, to upgrade its naval capabilities, the Egyptian Navy still possesses many obsolete and unserviceable platforms.

According to open sources, the Egyptian Navy has 154 surface vessels and submarines: however, the only vessels escaping the ‘obsolete and unserviceable’ definition are nine frigates, two BPC-210 MISTRAL-class LHDs (Egypt is the only country in the region with such capability – they are used as the command and control ships of the Northern and Southern Fleets), two Type 209/1400 submarines (with a further two under construction), four corvettes (a further three GOWIND 2500 corvettes are under construction and an additional two are on option), 18 landing craft and 36 FPBs. The service currently does not have its own naval aviation branch, but existing SH-2G (E) SUPER SEASPRITE, SEA KING Mk 47 and Ka-52 KATRAN naval helicopters are operated by the Egyptian Air Force.

Greece also has a modern navy, though it is smaller than either the Turkish or Egyptian navies. The main Greek surface fleet consists of nine ELLI-class and four HYDRA-class frigates, plus 17 FPBs with a further two under construction. The Greek Navy also operates a total of 11 submarines (three Type 209/1100, three Type 209/1200, one Type 209/1500 AIP and four Type 214 AIP).

The service had a declared intent to create a nine-ship flotilla (three frigates, three FPBs, two submarines and one fleet replenishment vessel) and deploy this force to its naval base at Souda Bay in Crete in 2016. The flotilla was planned to be deployed at Crete for a 30-day period and replaced by another of similar strength at the end of the deployment, but so far the service has not been able to realise this plan. The Greek Navy has a small naval aviation fleet comprising eight AB212 ASW, eight SH-70B6 AEGEAN HAWK and three SH-70B helicopters in use for multiple tasks. The whole fleet is based at Marathon-Kotroni, a small airfield close to Athens.

Israel, on the other hand, has one of the smallest navies in the region but it includes advanced submarines and surface vessels significantly upgraded with indigenous advanced sensors (including radar, sonar and electro-optics), electronic warfare and weapon systems. Tasked with securing the natural gas drilling rigs in Israel’s EEZ, the Israeli Navy’s main force consists three SAAR V ELIAT-class corvettes (being upgraded with the integration of EL/M-2248 MF-STAR active electronically scanned array (AESA) radar, BARAK 8 surface to air missiles, GABRIEL 5 surface to surface missiles and the C-DOME missile defence system), eight SAAR 4.5 HETZ-class FPBs (being upgraded with the integration of S-Band EL/M-2258 ALPHA AESA radar, GREEN DRAGON loitering munition or TAMMUZ/SPIKE non-line-of-sight missile launchers [4 x 6-cell box launchers], new command and control, observation and electronic warfare systems as well as a chaff-based missile defence system) and three DOLPHIN I and II AIP submarines, with a fourth under construction. As part of its modernisation plan, the Israeli Navy will receive four SAAR-VI MAGEN-class corvettes (the steel cutting ceremony for the first was held at TKMS shipyard on 7 February this year) and three DOLPHIN III submarines (for which a memorandum of understanding was signed between Israel and Germany in October 2017) during the next ten years.

The Israeli Navy operates in two separate seas — the Mediterranean, with major bases in Haifa and Ashdod, and the Gulf of Aqaba ,with a base in Eilat. Personnel totals almost 10,000, including the 300-man naval commando unit Flotilla 13 (equivalent to the US Navy SEALs or the British Special Boat Service), which is one of Israel’s elite special operations units. The Israeli Navy currently does not have its own naval aviation fleet: it has command authority over seven AS565MA SEA PANTHER (ATALEF) helicopters and operated by the IAF’s 193rd Squadron, which can be deployed on the SAAR-V corvettes when required. For the SAAR-VI corvettes, Israel also purchased eight second-hand SH-60F SEAHAWKs and related equipment from USN surplus under the Foreign Military Sales programme in 2016. Five of these will enter service, while the remaining three airframes are expected to be maintained for future service or cannibalised for spare parts to support SH-60F operations. 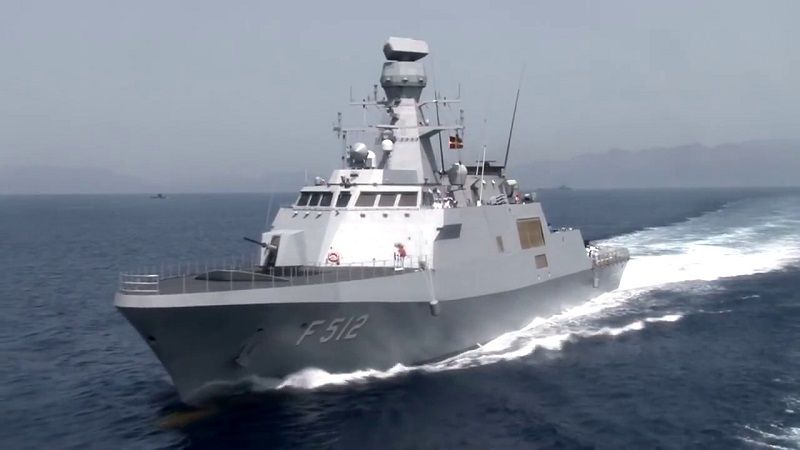