The Return of the Litmus Test?

Until the 1990s, every recruit was familiar with this: small yellow paper strips were attached to personal equipment, or placed on vehicle hatches. If they changed colour – a threat had been detected and NBC protection needed to be enacted immediately. In the Bundeswehr, these strips were called ‘Papier-, Spür-, Chemische Agenzien’ (Paper, Detector, Chemical Agents) and came in small, conspicuously blue packages, protected from light, as well as variants for detecting liquid agents and an option in powder form.

When Spielberg’s Saving Private Ryan hit cinemas in 1998, viewers wondered about the solid-coloured armbands worn on the right upper arm by US troops – what were they for? Over 20 years later, pictures on Operation Overland have brought the question back to mind – and an answer sought and found: the armband serves as an indicator of chemical warfare (CW) agents.

“If the armband turns purple, it has been in contact with a warfare agent,” the instructions read. For soldiers, this means donning a protective mask. British and American troops usually wore this on the right, with a loop to link to the epaulette. The official designation: US Army Gas Sleeve Detector. 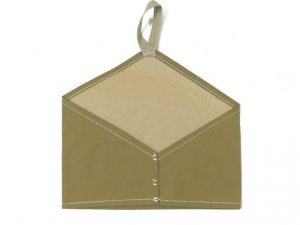 The US Army Gas Sleeve Detector. (Photo: US Army Museum)

Today, we recognise that research into CW – and the production of CW agents – intensified during the Second World War, but such agents were not used in the European theatre.

During the Cold War, however, increasing awareness of NBC threats from the Warsaw Pact meant small booklets of detector paper – ‘NBC tracer paper’ – were issued from the early 1970s, made so that it could be stuck on uniforms, equipment or vehicles to rapidly and simply alert the wearer to threats. The paper reacts to the presence of a warfare agent by means colour change – usually well before the soldier’s sensory perception – enabling initiation of personal protective measures and triggering an NBC alarm. With the end of the Cold War, tracer paper vanished into oblivion, distribution was restricted, and training with the ‘personal chemical detector’ was cut back.

By refocusing on national and collaborative defence, the entire spectrum of NBC defence – for all troops – has regained its former status. There are, of course, thoroughly modern autonomous NBC detection sensors available, though mainly at the level of specialised NBC defence troops, not at the small unit level on the front line. Simple, rapid detection of threats is therefore an imperative.

Thirty years after the fall of the Berlin Wall, a former Warsaw Pact member, now the Czech Republic, has built on its then expertise and taken the technological lead in the field of NBC defence. Thus the NATO Centre of Excellence (CoE)  for Joint Chemical Biological Radiological Nuclear (JCBRN) defence has its home in the Czech town of Vyskov, 40km from Brno. The JCBRN Defence CoE celebrates its 15th birthday this year, supporting NATO members and partner countries by advancing the processes of capability development, mission effectiveness, interoperability and NATO transformation, through the provision of comprehensive and timely CBRN defence expertise and experience. In total, 14 sponsoring nations are represented in the CoE, including the USA, Canada, France, the UK and Germany.

Czech companies are also prominently represented in the global NBC defence market – in which Prague-based ORITEST can be described as a ‘hidden champion’. Established in 1992 by scientists from the former state research institutes, ORITEST has developed into a world leader in the NBC defence market – especially vis-à-vis tracing papers – even though hardly known to the public. This claim derives on the one hand from the performance characteristics of the tracing papers, and on the other hand from the number of user states. Over 50 states use the CALID-3 tracing paper which, according to the manufacturer, is the only one meeting both NATO’s current requirements and the former requirements of the Warsaw Pact.

CALID-3 was developed for the simple, reliable and rapid detection of CW agents, and specifically to distinguish between the three main groups: G (‘Germany’ – nerve agents); V (Viscose2 – nerve agents) and H (skin warfare agents). The detection only works for the liquid form of chemical agents, whose microdroplets immediately produce a colour spot on the paper. Depending on the colour, it is possible to distinguish between groups of G, V and H agents in under 30 seconds.

According to the manufacturer, the paper can be supplied in strict accordance with customer-specified requirements – shape, language, number of sheets and packaging, etc., even for low order volumes. Standard packaging is 12 sheets of paper with self-adhesive backing, perforated in a booklet. Simulants for all agents (G, V, H) are also available. 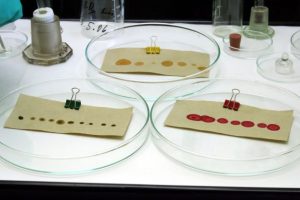 Usually, the tracing paper is e stuck on a user’s shoulder or on a vehicle windscreen – colour dots are clearly visible from inside the vehicle.

The tracing paper method is so simple, its use requires zero training. In addition, it requires no power, provides a quick response, and is inexpensive. According to the manufacturer, extensive international certification and test reports are available for the ORITEST tracing paper system, including from TNO, SÚJCHBO, VVÚ, and ÚOPZHN and it features a NATO stock number for ease of supply. 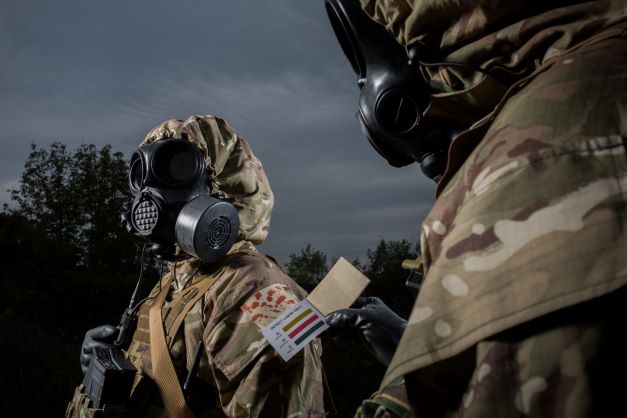 Use of the system is simple and requires no specialised training. (Photo: ORITEST)