The Long and Winding Road

Better access to finance, clarity of legislation – especially as regards taxonomy – and more inclusiveness. This is what is needed to improve European defence innovation performance, it emerged at a dedicated EDA 2021 annual conference in Brussels on 7 December. The meeting brought together high-level representatives from the EU, NATO, political, military, and industrial worlds to discuss problems and innovative solutions – particularly in emerging and disruptive technologies.

Europe has a decided problem with defence innovation. The bloc “stagnates in front of its main competitors or potential enemies [and] the growing gap could [even] jeopardise Europe’s interoperability with its partners,” explained EDA Chief Executive, Jiří Šedivý. Besides damaging industry, the lack of innovation is also detrimental to Europe’s geopolitical and military stance. “If we don’t have the [necessary] skills, we are already losers“, EUMC Chair, Gen Claudio Graziano, pointed out.

The EU and NATO are working hard to facilitate innovation. Fully one third of the European Defence Fund is dedicated to research, while EDA helps industry with various tools, and NATO is creating a Defence Innovation Accelerator ( DIANA) and a related innovation fund.

However, obstacles remain. Industry is particularly worried about financing and investments, calling for greater regulatory clarity. Its greatest concern is the EU draft environmental taxonomy – the green investment classification system – which labelled the defence industry as a “harmful” activity, potentially unsustainable for society (along with tobacco and gambling).

“What is happening is totally wrong and scandalous,” ASD Secretary-General Jan Pie said. “We need the European Commission to stand up and deal with the defence sector, which […] is a key factor for safe and open societies.” Hervé Dammann, Thales’ SVP Europe, added “Weapons are harmful, but it will certainly be less harmful to have those weapons than not.”

Another much-discussed issue was dual-use technology and the ‘spinning’ process between the civilian and military sectors. Indeed, as various speakers pointed out, civil sector leadership has crucial implications for innovation. According to Elettronica’s CEO/COO Domitilla Benigni, “what has changed most [compared to the past] is the speed with which innovation occurs, and also where innovation comes from [namely from the civil sector], which is clearly in the lead“. However, not everyone agreed completely. As Pie pointed out, there are differences between the military and civilian sector requirements, especially for emerging and disruptive technologies. Adapting them to defence is “a bit of a challenge, from a technological point of view [and even if] the Commission’s Action Plan on synergies between the civil, defence and space industries is a step in the right direction,” synergies can never replace the existing member states’ investment plans.

Another topic widely covered was the need to improve industrial inclusiveness, particularly by taking on board SMEs, which Slovenian Defence Minister Matej Tonin defined as “vehicles for development [because they] are able to adapt and respond rapidly [to] innovative ideas“.

To foster innovation, it is important for SMEs to “adopt new processes and learn from the prime defence companies [which], on the other hand […] have to learn from the more agile civil companies, SMEs and start-ups,” explained Peppas Antonios, CEO of ETME, a Greek engineering company awarded by EDA in 2015-17 for its dual use (renewables/maritime) technology.

Defence investments were one of the topics included in the EDA defence data report 2019-2020, published the day before the conference. It outlined some important positive trends, such as the rise of defence expenditure among the 26 EDA states for the sixth consecutive year. They allocated an aggregated €198 billion to defence.

However, in line with what was said at the conference, it also reported that the increase in defence investments was lower than previous years (5%, after three years of growth between 11-19%) and that the share allocated to defence investment (22%) remains below the investment levels of other major international players (US and China, both allocating 30%). 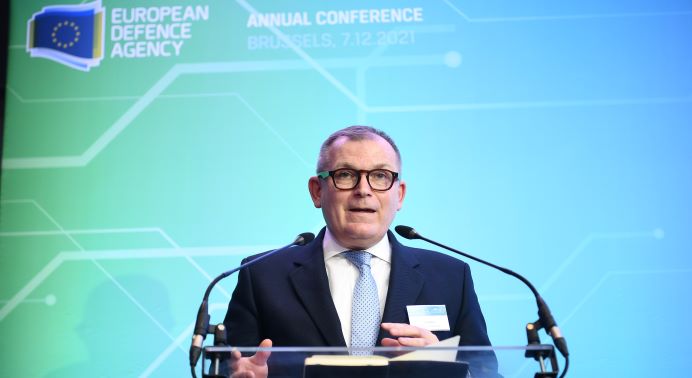