First Ship-set Delivered in May

After an exhaustive series of tests and evaluation over 18 months by a combined team from the Direction générale de l’armement (DGA – the French defence procurement agency), Thales and Naval Group, the Thales SEA FIRE radar has been fully qualified and is ready to be integrated on the French Navy’s FDI-class frigates, the companies announced on 21 October.

“The qualification of the SEA FIRE by the DGA is a key milestone of the radar development [and] is now ready for integration by Naval Group on the FDI frigate,” commented François Luc, VP Multi-Function Radars Business Segment at Thales.

The fully digital radar was evaluated and tested against an extensive range of surface and airborne targets in multiple environments. The radar’s ability to search simultaneously for air and surface targets under difficult conditions, scanning to a range of several hundred kilometres with 90° in elevation and an unmatched refresh rate, was fully proven. The system’s enhanced performance is due in part to its unique digital technology – digital beamforming, for example – and dynamic radar resource management within very short response times. It stands at the forefront of Thales’ technological innovation and benefits from the company’s ‘big data’ and cybersecurity expertise.

The digital nature of SEA FIRE’s also made possible the implementation of a high fidelity digital twin. Compared to classical simulations, this digital twin truly reproduces the radars’ behaviour and performance. It supports radar development throughout the product life-cycle, from initial development to in-service support, operation and upgrades. The use of a digital twin played a key role in securing SEA FIRE’s development schedule, despite the Covid-19 crisis. 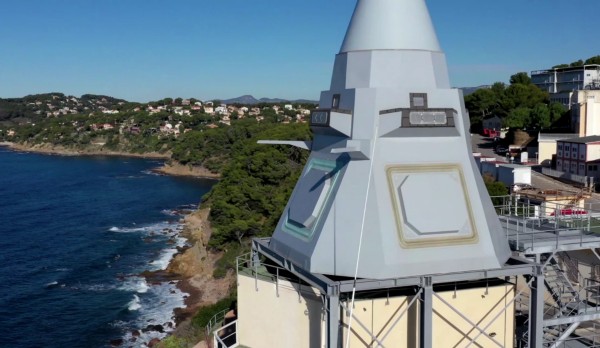 Production, supported by a network of small and medium-sized French companies, started in May 2018 and the first FDI ship-set of four panels was delivered in May this year. (Photo: Thales)