Tanzania has paraded a VT2 MBT, designed and manufactured by China’s NORINCO, in celebration of its 60th anniversary of independence.

Footage released by Kenya Digital News on 9 December showed a single example of the VT2 being carried on an Iveco heavy equipment transporter. The parade included several  examples of equipment in service with Tanzania, such as the Type 63A light amphibious tank, an upgrade to the Type 63 that introduces a 105mm main gun, and a single SCORPION tracked reconnaissance vehicle.

Tanzania has an established defence cooperation relationship with China, and operates a number of Chinese vehicles, including the extensively upgraded Type 59G, which dramatically improves the capabilities of the Type 59 or T-55 tanks. In 2018, Tanzania opened a training facility built with help from China’s People’s Liberation Army (PLA).

The VT2 is an export derivative of the Type 96 MBT that forms the armoured core of the PLA. It is essentially an analogue of the T-72B, armed with a 125mm smoothbore gun fed by a carousel loader, and comes complete with a suite of passive armour, to which explosive reactive armour can be added.

The procurement appears to be part of a general modernisation of the Tanzanian armed forces. Although primarily concerned with Islamist extremists, the country also has a history of conflict with Uganda. 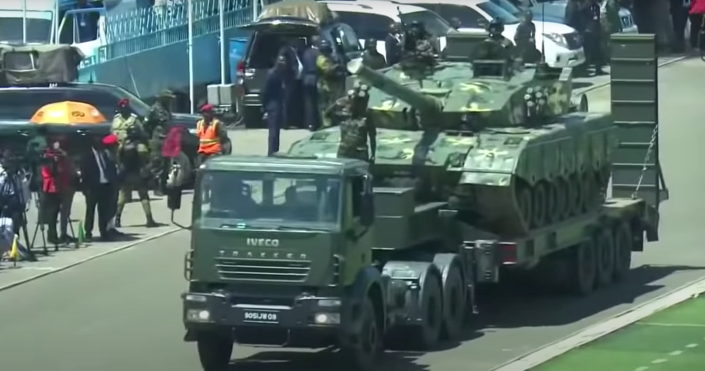 Tanzania has paraded a single example of the Chinese VT2 MBT indicating that the vehicle may now be in service. (Photo: Kenya Digital News)