Integration Could be for Testbed Purposes

The T-14 ARMATA MBT is receiving an upgrade that includes artificial intelligence (AI), according to comments made by Uralvagonzavod’s (UVZ) General Director, Alexander Potapov, in a 27 August interview.

The AI upgrades are being applied in addition to a number of other unspecified developments, Potapov stated. The AI will be applied to the MBT’s targeting system, but a human being will remain in control of the decision to fire.

Potapov’s comments suggest there is still considerable development work underway on the T-14. However, it is important to note that this development work is unlikely to relate to the experimental vehicles that UVZ shipped to the Russian army earlier this month.

Rostec and UVZ representatives have said on multiple occasions that the ARMATA would serve not just as a new generation of MBT, but as a testbed from which future concepts would be developed. It follows that the AI integration is related to broader goals within the Russian military.

The Russian MoD is pushing for greater automation through machine learning and AI integration in all branches of its armed forces. It is hoped that doing so will mitigate some of the technological deficiencies between the Russian military and its perceived opponents. 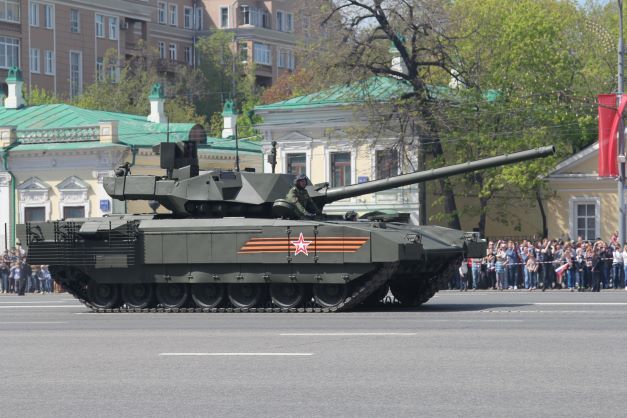 The T-14 is receiving an upgrade that includes the integration of AI, though it is currently unclear the extent to which this may be as a testbed for future exploitation. (Photo via Wikipedia Commons)