The two companies have created a modern SHORAD system, able to meet the requirements of NATO member states and other operators. See the MON coverage of the Saab statement here. A MARS vehicle was shipped to Sweden last year for integration, followed by a series of ground functional tests and firing trials. The vehicle offers many advantages, not the least of which is the possibility for each wheel’s ground clearance to be adjusted individually, facilitating stability in the adopted firing position. The vehicle boasts the largest interior volume in its class and outstanding levels of ballistic and blast protection.

MARS will be seen for the first time in public at Eurosatory in June. The modular, multi-purpose vehicle is entirely built in the Czech Republic and makes extensive use of components already widely used in various NATO forces. The 14t 4×4 variant is available in a variety of versions: a 6×6, 20t version also exists.

“The cooperation with the Swedish partner was absolutely exemplary in the whole project. We are very pleased to work with the market leader in anti-aircraft systems. Based on the requirements of several customers, SAAB Dynamics AB has long considered the installation of a 4×4 wheeled armored vehicle, and we are very pleased to have chosen our MARS for this important project. In mutual cooperation, a version of the vehicle was created, which represents a world leader in the field of mobility, protection of the crew against firearms and explosions and, of course, the ability to fight various air targets. Functional and shooting tests in Sweden went as expected and confirmed the top performance of the entire system. I am also very pleased that the specialists of the armed forces of a NATO member country also took part in the project, whose expert proposals helped to finalize the entire project in a form that meets the needs of the modern air force,” commented SVOS General Director, Ing. Jaroslav Černý.

”Working with SVOS has been a pleasure, [they] have demonstrated their ability to be flexible and responsive in developing and finalising our solution. The MARS 4×4 is an excellent armoured vehicle in providing a stable and capable platform for the proven RBS 70 NG weapon system. The combination of this weapon and this vehicle option provides a very effective and formidable mobile air defence capability that will meet and exceed our customers‘ requirements,“ added Paul Wooldridge, Product Director for Saab.

SVOS, celebrating its 30th anniversary this year, is a leading manufacturer of armoured vehicles and has produced over 5,000 vehicles to date. They serve in the most demanding environments worldwide and are operated by several countries, including NATO members, and by organisations such as the UN and OSCE.

For a video of the MSHORAD launch, click here. 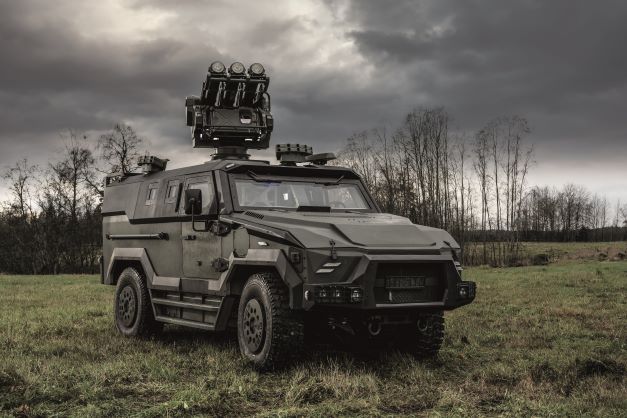