On 29 July, SIG Sauer Inc. was awarded a U$48,000,000 five-year, indefinite-delivery/indefinite-quantity, firm-fixed-price contract for the acquisition of the Suppressed Upper Receiver Group (SURG). The SURG weapon is an upgrade of the M4A1 lower receiver group in support of US Special Operations Command (USSOCOM) Procurement Division. Fiscal 2018 procurement funds in the amount of $24,620 are being obligated at the time of award.

The majority of the work will be performed in Newington, NH/USA, and is expected to be completed by July 2023. This contract was awarded through full and open competition. USSOCOM headquarters, MacDill Air Force Base, FL, is the contracting activity.

SURG is a 5.56mm, integrally suppressed upper receiver. Despite assertions to the contrary on other websites, this is not a SIG Sauer RATTLER kit, states the Soldier Systems website. SURG was one of USSOCOM’s long term projects with the requirement first being identified in 2015. Back in March 2017, it was reported that USSOCOM revised their 2016 SURG solicitation and again sought submissions from manufacturers.

However, there an entirely different programme to offer a Personal Defense Weapon upper in .300. Earlier this year, USSOCOM purchased a handful of SIG Sauer upper receiver systems to inform the requirement. Expect USSOCOM to release a solicitation in FY19.

SURG asked industry to keep the handguard cool enough to handle even after firing the SOCOM suppressor torture test with M855A1.

SIG Sauer are likely supplying a 5.56x45mm version of their Suppressed Upper Receiver, originally unveiled in .300 BLK back in 2016. The SUR can be mounted on both AR-15 and SIG MCX based rifles and includes an integrally suppressed barrel enclosed by an almost full-length railed forend. Details of the SURG are not currently available and it is unclear what parts the conversion kit will contain. 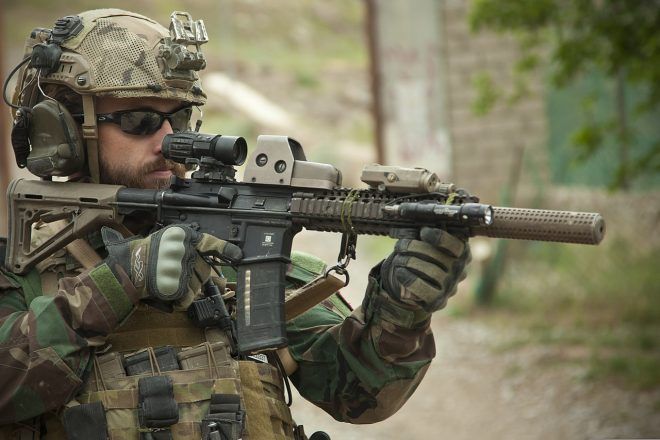