SNA 2022: “The Most Important Region in the World”

Retired US Admiral Sam Locklear – a former commander of US Pacific Command – provided delegates to Surface Navy Association Symposium 2022 (SNA 2022) with very candid, broad and specific perspectives for the US and its Navy in the Indo-Pacific Command AOR (area of responsibility).

Speaking as a former commander  and as president of SJL Global Insights, Locklear opened his remarks with the observation that “this AOR is strategically the most important region in the world, not just for the world, but to our country and its future as well.” He noted that, while he eagerly consumes television network news and other open-source media outlets in the US, “I never hear much about the Indo-Pacific.”

Locklear then briefly outlined current, dangerous transnational threats to the US and its allies in the region, including: overfishing; drug precursor manufacturing and the enabling criminal gang networks; massive human trafficking; and pandemics. And then there is China. Locklear was initially almost pragmatic about the expanding Chinese presence and influence in the AOR. For instance he noted the US’s recent, persistent ambiguity on Taiwan has led to a status quo, as such, between the US and China. But he then pivoted and discussed the necessity to develop a multi-faceted US strategy to strengthen the nation’s presence in the AOR.

Noting the imperative to develop many more capable yet inexpensive unmanned systems, and “split the cost curve,” he called for an active US Navy-Marine Corps dialogue to help decide the future surface force structure, beyond cruisers and destroyers, to include amphibious ships, which will be the prime movers in the US Marine Corps’ current doctrine and strategies to win a war in the vast region.

Locklear significantly segued into a “whole of nation” perspective on how the US must increase and maintain an effective presence in the AOR. While he noted the USN must “pay attention” to the US Coast Guard and continue to integrate the latter in its concept of operations, he added that the Pentagon and Navy’s Arctic strategies must also evolve, so they go “hand in hand” with strategies for the Indo-Pacific.

While Locklear called on the US State Department to “up the ante,” and invest in more personnel and other capabilities to more effectively engage China, he noted the US industrial base should similarly be strengthened to support US missions in the Indo Pacific region. 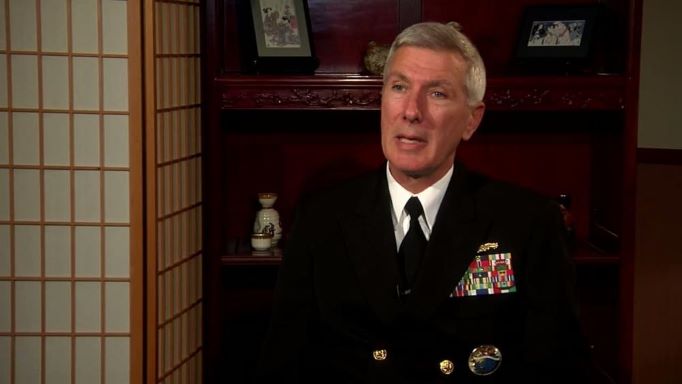