The US Navy and US Coast Guard are broadening their requirements for maritime surveillance systems. By integrating artificial intelligence (AI) and other enablers, platforms gain better return on investment, including reduced sensor operator interface actions and expanding sensor package capabilities. Mark Garland, Product Manager – Land and Maritime Gimbal Systems at Teledyne FLIR, provided some insight into these dynamic developments.

For example, the company has enhanced its Sea FLIR-280 HDEP maritime surveillance system to support small- to medium-class manned and unmanned vessels. “We see this as a major growth area. To meet that growing need, we’ve focused our technology investments on integrating AI to support Aided Target Recognition (AiTR), plus improved sensor and range performance, and enhanced control electronics,” Garland commented.

SeaFLIR 280-HDEP was said to be the first maritime gimbal in its class to leverage edge processing to provide low-latency AI capabilities that enhance detection of objects of interest. “For Navy and Coast Guard operators, this means reduced cognitive workload and greater situational awareness, which is especially important with the shift toward expeditionary naval deployments with expansive areas of open water to surveil,” he explained, going on to comment on the customers’ expanding mission sets to be supported. Designed for full-time, all-weather maritime duty, the SeaFLIR 280-HDEP provides long-range target detection, identification, and tracking for a broad range of mission support, such as: ISR; maritime SAR; interdiction; covert operations; EEZ constabulary; and disaster recovery. Two key improvements to the 280-HDEP technology baseline include: fibre optic cabling between the Turret FLIR Unit and Control Electronics Unit to achieve distances between Line Replaceable Units (LRU) up to 300m without the need for a third LRU; and FLIR’s patented Medium Wave Infrared (MWIR) Integrated Dewar Cooler Assembly, which boasts a mean time between failures of more than 10,000 hours and a linear cooler design for improved reliability.

Maritime services should be alert to Teledyne FLIR’s development of a new 40lb gimbal with enhanced capabilities, which it expects to launch later this spring. “The forthcoming sensor features a brand-new fourth-generation system architecture and will leverage a number of technology enhancements, such as the ability to support AiTR via FLIR’s neural network target classifier, along with multi-sensor capabilities, including HD MWIR thermal, HD visual, as well as eye-safe Laser Range Finder and Laser Pointer options,” Garland revealed.

The Naval Surface Warfare Center recently awarded the company a significant contract to provide replacement parts and technical support for several land- and sea-based systems used for ISR missions by the USN and USCG, including the BRITE Star II, the Sea Star SAFIRE III, and the Star SAFIRE 380-HD. “The Star SAFIRE and BRITE Star family of systems are fully hardened for military fixed-wing and helicopter operations, and include an MWIR thermal imager, low-light cameras, and multiple laser payload options,” Garland concluded. 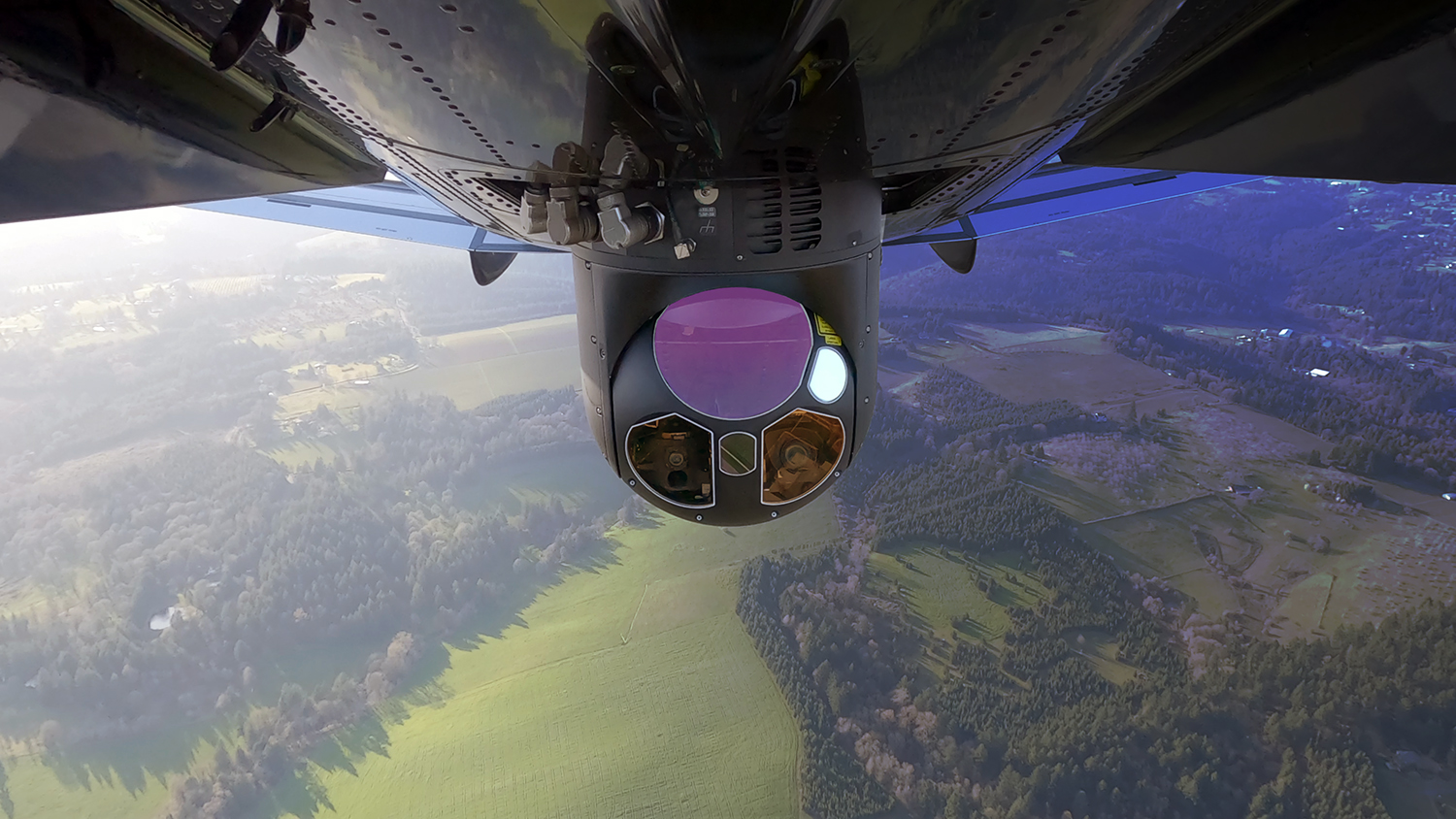 The Star SAFIRE sensors (380-HD illustrated) have been developed as fully hardened articles for both fixed- and rotary-wing applications. (Photo: Teledyne FLIR)