Two CIRIT laser-guided missiles launched from the ULAQ unmanned surface vessel (USV), developed by Meteksan Defence and ARES Shipyard, successfully hit their targets during the Turkish Navy’s recent ‘Sea Wolf 2021’ exercise, the companies announced on 31 May. The exercise was hailed as “the most comprehensive naval exercise in the history of the Turkish Republic.” Turkish Naval Forces Command and Coast Guard Command vessels accompanied the ULAQ USV as it detected and acquired the target, attacked it and scored direct hits with the CIRIT missiles.

During the event, attended by senior officials from the Presidency of Defence Industries, Ministry of Defence, Turkish Naval Forces Command and Coast Guard Command, ARES Shipyard CEO, Utku Alanç, stated that, with the completion of the firing tests, the companies aim to develop the “world’s best unmanned surface vehicles,” pioneering the best of Turkish engineering in the field. He also pointed to an ambition to bring Turkey to a leading global position in USV, in the same manner as already achieved with UAS. The same comments were echoed by Meteksan Defence President, Selçuk Alparslan.

After the opening speeches, ULAQ AUSV, which was positioned in the south of Antalya Bay with Turkish Navy’s other combatant manned platforms, took action and was directed from the Mobile Coastal Control Station (MCCS) and transferred to the firing area. The Naval Forces Command and Coast Guard Command platforms also accompanied the firing. After the target was detected by sensors on the ULAQ, CIRIT Laser Guided Missiles were fired and resulted with direct hit on the target. The USV carries four CIRIT and two L-UMTAS missile systems, both developed by Roketsan: it can also be configured with other weapons and payloads, including EW, communications and ISR systems.

The President of Defence Industries, Professor Dr İsmail Demir, explained that, in view of the growing requirements for Turkey’s self-sufficiency in defence development, “we have reached an indigenousness rate of up to 70% in our projects, and we will increase this even more […] The days have come where we began to see similar products to the game-changer UAVs, now in land vehicle, surface vessel and submarine forms. We are aware that combat environments with integrated unmanned systems await us, and therefore we continue our work accordingly. We are supporting the endeavours to be put forward in this regard and we will continue to support them.”

ULAQ can be controlled from shore stations, even ground vehicles, or from vessels afloat. The range of potential missions it can already conduct is wide, including ISR, surface warfare, asymmetric warfare, armed escort/force protection and critical infrastructure protection, among others. Moreover, with an ability to operate alone or in ‘swarms’ with other unmanned systems, on or beneath the water or in the air, ULAQ is not simply a remote-controlled unmanned system – it is a state-of-the-art autonomous vessel, whose artificial intelligence brings it superior capabilities.

For a brief video of the firing trial, click here 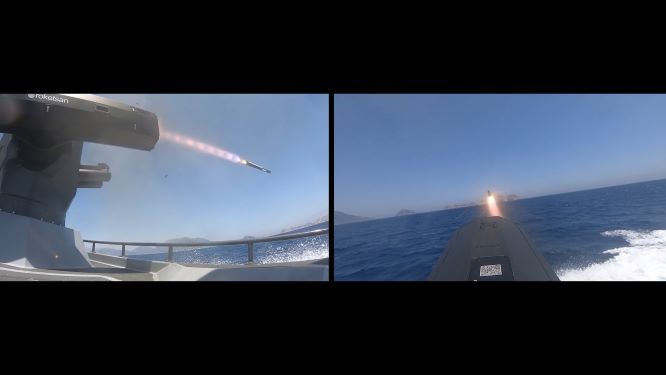 Continued development of ULAQ is likely to see variants with wider capabilities being produced, embracing specialized mission requirements in ISR, EW, mine countermeasures, anti-submarine warfare and disater assistance. Among others. (Photos via ARES Shipyard/Meteksan Defence)