Sperry Marine has strengthened its portfolio of military navigation solutions with the release of Additional Military Layers (AML) for its VisionMaster series of radars and ECDIS [electronic chart display & information system], the company announced on 25 August.

The AMLs have been developed to allow defence and naval users to take advantage of Sperry’s commercial radar systems on demanding military assignments for both small and large vessels. The latest enhancement supports the display of AMLs created to support C2 functions and to provide digital navigation systems that ensure optimum situational awareness for marine operations.

By combining the navigational features and functions of VisionMaster with enhanced features and high-performance configurations, VisionMaster naval radars and ECDIS offer high-specification military functionality with a lower total cost of ownership than many naval systems.

“In recent years, navies have had to balance performance requirements against tight budgetary control at a time when the scope and number of missions has increased,” stated Christophe Rios, Global Line Manager, Radar and Chart Displays at Sperry Marine. “The VisionMaster series of radars and ECDIS has been developed using the latest technology to keep costs under control, but still with a choice of configurations and options needed for any type, size and class of vessel.”

VisionMaster radar and ECDIS include a number of enhancements designed for naval operations. Among these is ‘Red First Strike’ functionality, providing an immediate indication of fast moving targets, such as fixed- or rotary-wing aircraft and fast attack craft, by highlighting them in red.

A Target Intercept feature allows operators to plan and execute intercept manoeuvres between one vessel and another, including from ‘ownship’ or from one tracked target or AIS target to another. This improves operator reaction time, by simplifying identification of any potential threat.

If it becomes necessary to impose radar silence during a mission, operators can use the ‘Freeze Frame’ function to display a frozen picture of the radar situation immediately before radar silence was imposed.

To overcome the challenge of station-keeping and monitoring nearby vessels, the radar operator is able to set up a sector for each such vessel, which will allow instant visibility of any vessel having moved out of its correct position.

”It is clear from growing demands of the role they play that the next generation of smaller naval assets will have to move up the value chain in terms of capability, providing very powerful platform for a variety of missions,” explained Per M Soerensen, Business Development Director International Defence, Sperry Marine. “Linking the requirements of tactical operations with higher specification equipment can provide an increased level of navigational performance and improve the human-machine interface.” 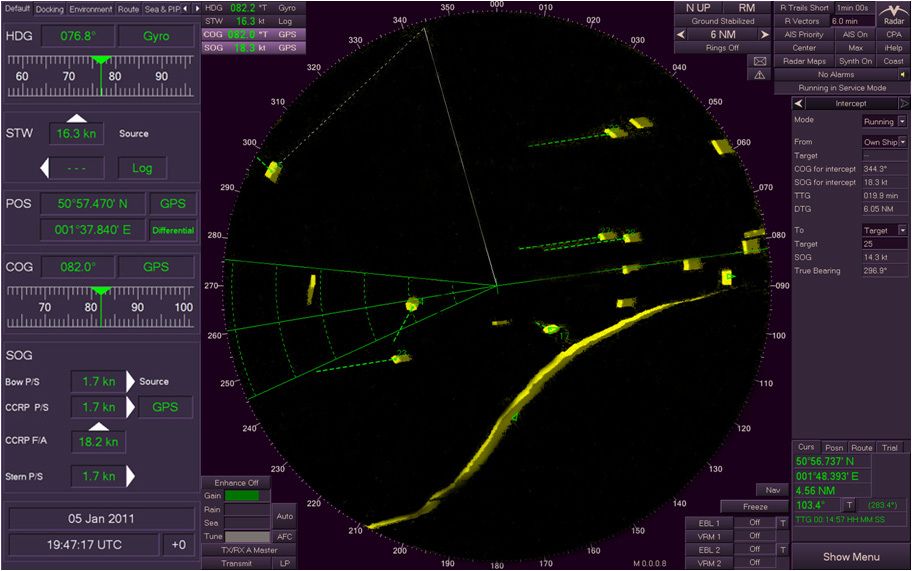